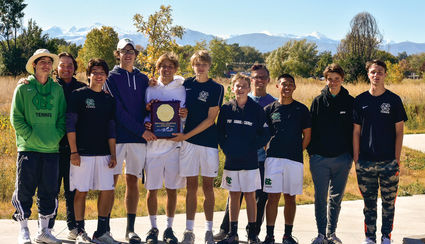 Due to the early bout of winter on Oct. 10, the Class 4A Region 5 boys tennis tournament may not have started as expected, but it did end that way-with Niwot claiming another regional title on Oct. 11. With wins in six of the seven championship matches, the Cougars will advance as a No. 1 seed to the Class 4A state tournament, which opens at Pueblo's City Park on Oct. 17.

Afterwards, head coach Miikka Keronen said he feels the Cougars are "in a good place," both mentally and physically, and he even had some bold predictions for the upcoming championships. "I kind of like every line... If I'm on the bus to Pueblo with 11 guys, I feel we can score a lot of points."

He wasn't alone in making bold predictions. Junior Neil Wilcox, who amassed a 12-0 record at No. 1 singles in the regular season and then beat Longmont's Henry Matheson 6-3, 6-2 to claim a third regional crown, also predicted a state title for his team. Last year, Wilcox finished third at state, and Keronen considers him a favorite for the crown in 2019.

Another state title hopeful is senior Anton Lavrouk, who claimed his third straight regional title, this year with partner Ivan Calderon at No. 1 doubles.

"We came really close last year," he said, after beating Erie to earn a third straight berth to state. In 2018, he and partner Riley Mulshine were runners-up at No. 2 doubles. "This year I feel like we really have a chance. All of our lines could win."

Lavrouk and Calderon finished 7-2 as a pair in 2019, their losses coming to Fairview on Sept. 5 and Mullen on Oct. 4. Lavrouk also played two games at two-singles, amassing a 1-1 record. He said that their key to their victory in the regional was "less stupid mistakes," and he also got an unexpected assist from the weather. 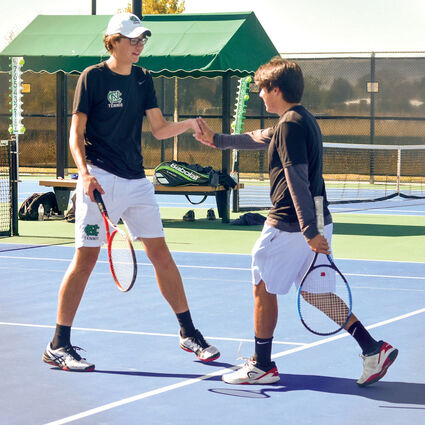 Senior Anton Lavrouk and partner Ivan Calderon after winning a point against Erie in the No. 1 doubles championship match at the Region 5 tournament on Oct. 11.

Weber will be making his first trip to the state tournament, after he and Moy survived a challenging three-set match against Longmont to claim the title. After dropping the second, the ninth-grader said he and his partner were roused to come back in the tie-breaker by a boisterous cheering section, led by teammate Bicknell.

"It's always fun to play when your teammates are watching and cheering you on," Weber said. "I also think it gets into the other team's head a little, so I'm really appreciative that my teammates came to support me."

Keronen said the team will "practice hard for two hours a day" on Monday and Tuesday, before hitting the road to Pueblo on Wednesday. He declined to talk about his strategy going into the championships but said he is "working on a few things."

"We always change a little bit before state. A lot of coaches see what you do, so you don't want to be the same."