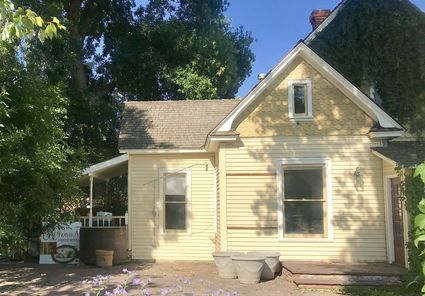 Workers moved belongings out of the Bader House at 210 Franklin Street following the sale of the property that had been in operation as Colterra restaurant from 2005 to 2017.

It's official - the property formerly known as Colterra's restaurant has been sold for the asking price of $625,000. As of Friday, Sept. 6, the new owner of 210 Franklin Street is Palmos Development Corporation of Boulder. The family-run real estate development business is planning to build a mixed use project with the historic Bader House being the commercial property and the larger restaurant building most likely being replaced by residential property.

"It's just a great piece of property," Terry Palmos said "and it has tremendous character, and a great feel. It's a really important part of downtown Niwot."

Palmos said plans for the corner are not set and the only thing he could say with a high degree of certainty is that the Bader House will be preserved along with the outdoor space, including the flagstone patio that surrounds it.

"I'd like to really explore potentially adding on to the Bader House or transforming the Bader House into a restaurant which would require adding a kitchen and bathrooms in order to take advantage of the historical value of that home," Palmos said, "because when you sit in that building it has such a great feel and then I just kind of envision a food use there - whether it's a breakfast and lunch place or a lunch and dinner place or maybe all three and then take advantage of all that outdoor seating potential because it's just really special. So we really want to explore that extensively."

"I think that there are some opportunities on the back half of the property to do some things," Palmos said pointing out that the fire damage that closed the restaurant in October 2017 and the lack of a foundation for the building originally built as a barn means that rebuilding is not viable.

"I don't think that the way that building is built, with the issues structurally and what not, that it can stay there," Palmos said.

He said there's a possibility that residential units will be built on that space, but the process is just beginning and his company is looking at a lot of options. Formal plans need to be drawn up for the property before he could talk further about it.

The next phase is determining which ideas are best and what the county will allow. Palmos said figuring out how to make the Bader House a more usable space is a high priority in the process.

Palmos Development is a family-owned real estate company, started in the 1960s in Boulder. The company has done projects along the Front Range--everything from residential to retail to mixed use. The Willow Springs Shopping Center at 28th Street and Iris Avenue in Boulder is one example.

"I think this corner is a big part of Niwot, and we want to bring it back to life," Palmos said.