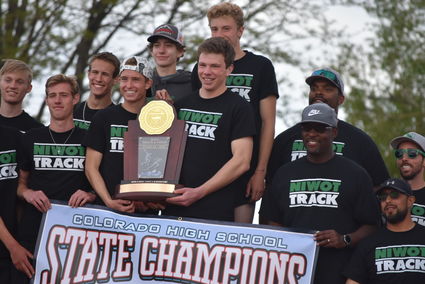 Niwot track and field coach Maurice Henriques (in sunglasses) helps his athletes with training during the off-season with R.E.A.L. Training Colorado.

Hard work is a top priority at R.E.A.L. and the athletes take this to heart. Bringing on runners that exemplify these traits is a top priority for Henriques. The success that his runners have had is no mistake.

“It feels great,” said Henriques, who spent his college years playing football at the University of Colorado Boulder. “We’ve got a great coaching staff. There’s no substitute for hard work. People don’t realize that we train 11 months out of the year.”

Off the track, Henriques served as a probation officer at the 20th Judicial District for 18 years and now serves as the District Attendance Advocate for Boulder Valley School District. It’s no question that Henriques enjoys helping the future generation and his accolades speak for themselves. The head track and field coach at Niwot High School has won multiple state titles and was named the Denver Post Coach of the Year in 2013 and 2015.

Henriques’ work ethic has rubbed off on such talent as Emily Boldt and Elise Cranny. Boldt graduated from Niwot in 2010 and found success as a middle distance runner at Vanderbilt University. Cranny won multiple state titles at Niwot before graduating in 2013. She was also a two time Colorado Gatorade Girls Cross Country Runner of the Year and found collegiate success at Stanford University.

Kelly Christensen is another key component of what makes R.E.A.L. so successful. The head cross country coach and counselor at Niwot since 2016 certainly has his hands full. Christensen thrives on challenging his runners while allowing them to be self-motivated.

“The kids usually set the tone as far as like what they want to do, and they set high goals,” explained Christensen, who was the CHSAA 4A Boys Cross Country Coach of the Year in 2014 at Palmer Ridge High School. “My main goal was with both teams was Just to continue to develop their fitness. We have this mindset that we can continue to develop fitness and the results will take care of themselves with that consistency. That being said, they’re kids and they want to have some sort of outcome goal as a result and they both (girls and boys) want to win state titles.”

While Christensen centers his attention on stamina and Henriques focuses on developing speed, the two make a solid duo in producing well-rounded runners. The potential of R.E.A.L. is high, and growing the program is a goal for both of them.

“We want to create a community and a culture (where) everyone gets faster together (and) give(s) all kids an option to do something in the offseason,” said Christensen. “We’re hoping really that we can branch out and we’ll just keep sending emails and making phone calls to all our neighboring schools.”

Target schools include Longmont, Centaurus, Lyons, Silver Creek, Boulder and Fairview according to Christensen. Finding room to grow is not a problem to say the least. Boulder County has never been short of talented runners, so it’s no mystery why Henriques and Christensen have dedicated so much work to the area.

Watching their runners flourish is another reason the two enjoy coaching.

“It’s awesome. Every year we get to see kids break through that have been sticking with it for two years,” said Christensen. “I’d be lying if I didn’t say I don’t cry at least once or twice every time I see that happen in the moment.”