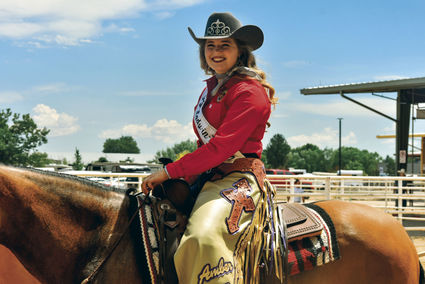 Photo by Jocelyn Rowley Niwot senior Amber Nusser made her “grand entrance” as 2019 Lady-In-Waiting at the Boulder County Fair on Aug. 4.

What it lacks in air-conditioned palaces and fancy formal dinners, the year-long reign of the county fair queen more than makes up for in dusty arenas and long trips to distant horse shows. But Amber Nusser, the newly crowned 2020 Boulder County Fair Livestock Show Rodeo Queen, wouldn’t have it any other way.

“It’s a lot of work, and a lot of hours, but I love it,” Nusser said after an appearance with her horse Miley during the 150th annual Boulder County Fair on Aug. 4. “It’s so unique to have a family here, and a group of people that understand what you do, how you spend your hours, and then be able to talk about random horse things with.”

Nusser’s reign doesn’t officially begin until Aug. 13, the day before she begins her senior year at Niwot High. For the past 12 months, she has served in the Royalty Court as Lady-in-Waiting, which is essentially the “queen-elect.” Nusser was selected for that position in 2018, after competing against other contestants in public speaking, horsemanship, and modeling.

“The Lady-in-waiting basically spends the year learning from the queen, so I spent the year traveling,” she said. “We go to various fair board events, various community events, rodeos, and a lot of different events throughout the year to promote the Boulder County Fair, especially because this year was the 150th celebration.”

To be sure, Nusser brings a wealth of experience to the position, including a stint on the fair court as Princess in 2017. An avid rider from a young age, she has been a member of the Boulder County 4-H program since age nine, and has accumulated dozens of accolades and awards. She has competed with her horse Bill at the state and national levels, both individually and as a part of the Rocky Mountain Wrangler Interscholastic Equestrian Association team. At the recent IEA Western National Finals, she took first in varsity intermediate reining and picked up a custom saddle valued at $4,200. 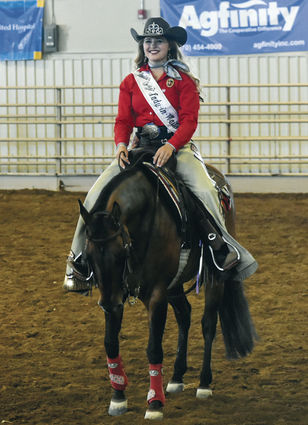 When she’s not embroiled in court intrigue, Nusser keeps busy in the classroom as a member of Niwot’s demanding IB diploma programme. She has also competed for the Cougars’ gymnastics, dive, and track teams, and is in the National Honor Society and FFA. She is planning to pursue her equestrian career in college, and is currently considering offers from the University of Califonia-Davis and Texas A&M.

Nusser is looking forward to sharing her passion for horses and farming during her reign and educating the community about agriculture and western lifestyle while promoting the fair. However, it will be bittersweet as her 4-H career comes to a close, and she spends her last months with a group of friends she considers as close as family.

“The days may be long but the weeks are short,” she said. “So cherish the friendships you make.”