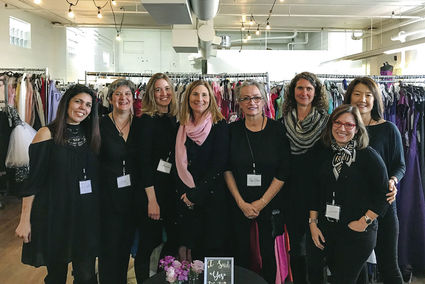 In early 2017, Virginia Dutkin and 20 of her Niwot neighbors launched the Left Hand Giving Circle, a philanthropic organization that uses pooled resources to donate funds and volunteer hours to area non-profits. In the two years since, the group has granted $30,000 and donated nearly 1,000 community service hours to local programs and events. Now in its third year, LHGC has grown to 50 members and the list of community organizations it has impacted is rapidly expanding.

For Dutkin and the group, 2019 is shaping up to be their busiest yet. In April, they completed their first grant cycle of the year, awarding a total of $7,500 to Longmont Meals on Wheels and Cultivate (formerly Boulder CareConnect) “for their work in helping to improve the quality of life for seniors in our local community.”

Members reviewed more than 20 applications, submitted in both written and video form, and then voted on the finalists. The funds were then distributed through the Longmont Community Foundation, a public charity that helps individual and small-group donors manage their charitable giving.

LHGC is gearing up for its second grant cycle later this fall, and for those awards, the group is targeting “organizations and programs that engage community members in order to promote the health and sustainability of the environment.” Announcements about the deadline and application process will be coming from the LCF in the coming weeks.

LHCG members have also been generous with their time so far in 2019, and you’ll likely be seeing more of them this fall. Earlier this year, the group volunteered at Intercambio, which received a LHCG grant in 2018 for “helping to combat isolation and loneliness by creating, uniting, and/or engaging community members to develop a sense of belonging.”

The Boulder-based non-profit offers English language education to adult immigrants. During a “conversation team event,” LHCG members spoke one-on-one with Intercambio students, which Dutkin said was a great opportunity “to learn more about the cultural experience of immigrants in our community.”

In March, the group took a trip to Denver for a day of volunteering at Bella Boutique, which Dutkin called “super-fun.”

“They provide free prom gear to low-income girls—their household income is less than $30,000. So we went and volunteered as personal stylists, working one on one to help them find the perfect prom outfit. It was awesome.”

LHCG has a packed schedule in the coming weeks and months, starting with a double-shift packing backpacks for Crayons to Calculators, a program sponsored by the area school districts that provides school supplies to struggling students. In September, members will be helping out at the ‘Rock the Boat’ benefit concert, the inaugural fundraiser for the Able to Sail, another recent grantee. Later that month, they will be serving lunch at OUR Center for the third year in a row.

“For that one we have to actually plan the menu, buy the food, cook the food, and then serve the lunch,” Dutkin said.

In October, the group will be helping Longmont seniors clean up their yards by serving as ‘Yard Busters’ for Cultivate. During the holidays, members will be assisting with the Meals on Wheels annual ‘Gift of Home’ tour, and then embarking on a project with a new partner. 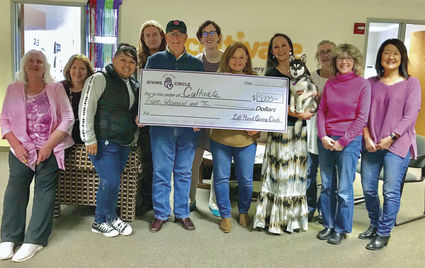 Left Hand Giving Circle awarded two grants earlier this year to “organizations that help seniors in the community.” Cultivate (formerly BoulderCareConnect) and Longmont Meals on Wheels were this year’s recipients.

“There With Care is a fantastic local non-profit that helps families with children facing critical illness,” she said. So we’ll be providing them with a holiday meal and a gift not only for the ill-child, but also, the siblings and parents, and delivering that to them.”

LHCG relies primarily on the support of its membership, but also benefits from sponsorships from local business including Nourish, Tool Studios, and Niwot Wheel Works, which helped the group organize a bike tour for members earlier this month. The group also receives an occasional cash grant from other non-profits.

While LHCG participates in many fundraisers, it is does not hold them on its own behalf. However, the group is slated to receive tip jar proceeds from the Rock & Rails concert on August 1, featuring Mojomomma/Brigitte Purdy & Bobby Messano. Money raised there will support its financial grants.

For more information about the Left Hand Giving Circle, its grants, or its upcoming activities, visit http://www.lefthandgivingcircle.org