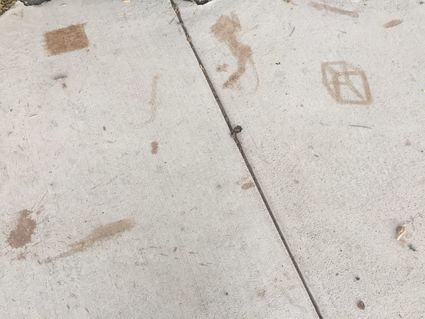 Recent vandalism at Niwot Children’s Park, and across the street at Whistle Stop Park, has prompted the Niwot Cultural Arts Association (NCAA) to install security cameras at the sites.

Tim Wise, a member of the Children’s Park building committee who continues to monitor the park for maintenance issues, removed graffiti from the boys bathroom earlier this year. Jim Fletemeyer, another member of the building committee, noticed that someone had placed pornographic material in the Little Free Library at the park, which was promptly removed. And a neighbor of the park recently reported late night activity at the park to the Boulder County Sheriff’s office.

Then on July 1, Bruce Madison of Bruce’s Lawn Service, which takes care of the landscaping, reported that someone had painted suggestive pictures on the sidewalk at the park. Those crude drawings are in the process of being removed at press time.

The NCAA, which manages the park for Boulder County, is prepared to prosecute vandals who damage the park. “We had hoped that people would respect the park, and the effort that went into building it, enough that vandalism wouldn’t be a problem,” NCAA President Biff Warren said. “Sadly, that has not been the case, so we are prepared to add security cameras to the park to apprehend those responsible.”

Activity at the Children’s Park has been high now that school is out, but Warren noted that many park users seem to ignore the “Pack it In, Pack it Out” signs, as there are no trash receptacles at the park. The cleaning service for the park reports that people are scattering trash inside the restrooms, which causes additional cleaning expense.

On a more positive note, Warren said that donations to the maintenance of the park are increasing, especially among those who reserve the park for birthday parties or other occasions. “It costs us over $10,000 per year to maintain the park,” Warren said. “That includes water, sewer, cleaning, mowing, landscape maintenance, electricity, wood chip replacement, minor repairs, and insurance. Most of those expenses are paid from Rock & Rails revenue by the NCAA. Now we will have to come up with additional funds to install security cameras.”

Across the street at Whistle Stop Park, which is owned by the NCAA, several reports of children climbing on top of the caboose were received back in May. Bill Whitener, who prepares the park for Rock & Rails every year, noticed that someone had broken the plexiglass panel that prevented people from climbing up a ladder to the top of the caboose. No sooner had Whitener replaced the plexiglas panel than it was broken again. Since then the panel has been replaced again, and it has remained intact.

Warren urged community members to be vigilant and report any suspicious activity at the parks to law enforcement. He also asked that park users respect the property of the park neighbors, and asked that everyone enjoy the park responsibly.