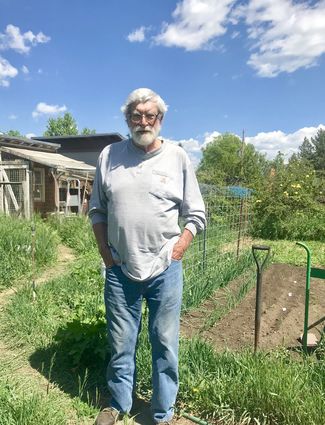 Photo by Vicky Dorvee Niwotian Tom Theobald has contributed his time and energy to our community for nearly five decades and is being honored as this month’s Left Hand Laurel recipient.

Tom Theobald only will allow the Courier to bestow a Left Hand Laurel to him if his community involvement is qualified as being historical. Not a problem, because he did begin making a difference quite a while ago. But, we can’t resist saying he’s still a force for what’s good and continues to contribute greatly to this community and beyond.

Seventy-six year old Theobald reminisces about his days growing up on a lake in Delavan, Wisconsin roaming the fields, wearing a bathing suit all summer long, and the total freedom he felt spending time outdoors. One of the unquestionable themes of Theobald’s life is his adoration of and sense of responsibility to nature.

Adjustments lead to life all abuzz

In 1965 Theobald moved to Colorado where IBM was on a tear to bring on talented young people as quickly as possible. Like many of the new hires, Theobald was fresh out of college, having graduated with a degree in psychology from the University of Wisconsin-Madison.

Wanting to live closer to work, in 1970 Theobald, his wife Barbara, whom he’d met in high school, and their daughter Tracy moved to the corner of 3rd Avenue and Franklin Street in Niwot. But not long after, he walked by a “mostly derelict little old farmhouse” for sale on Neva Road. He said he felt a genuine connection to the land and the home that had been built in 1895. So he moved his family to what was originally called Shady Nook Ranch, and it has been his home ever since.

Theobald worked in IBM’s personnel department and eventually focused on management development. In the era when buzzwords like “corporate team building” became popular, Theobald came up with the idea to build teams in a wilderness environment, away from their usual work life. He was given a leave of absence to get the idea off the ground in the remote Flat Top Wilderness area. But he said the program was too ahead of its time.

“I came back to work and I wasn’t happy,” Theobald recalled. IBM put Theobald in their systems’ programming school. Halfway through the program, Theobald called his manager and resigned.

When asked what his heart wanted that he wasn’t getting from his work, he answered simply, “The outside.”

While taking a break after his 10 years of corporate employment, Theobald said he observed that his big garden could use a colony of bees. To find out what that would entail, he met with a couple of longtime beekeepers in Boulder.

“What I came away with was the strong impression that these two people had done something with their lives that they just loved, and I thought, ‘This is worth a try.’” So he took what money he had left, bought 40 bee colonies and started the Niwot Honey Farm.

“Most women would be down the street with their hair on fire,” Theobald said about the moment he told his wife about the decision. “Barbara was wonderful. Anything that I decided, she’d support and follow me.”

At the business’s peak, he had 200 colonies spread throughout the area producing an annual harvest of several tons of high-quality honey. The business thrived and so did his reputation in the beekeeping world, making Theobald a much sought after expert. He helped found the Boulder County Beekeepers Association in 1975, served as its president for 30 years and was the Boulder County Bee Inspector for nearly 20 years.

He developed one of the nation’s first spray alert systems, which gave beekeepers the notice they needed to protect their colonies from dangerous toxins being spread on nearby crops. Seasonally, Theobald would often take several calls a night from the applicators of the chemicals and then make dozens of calls to area beekeepers. With all of the calls and covering his own beehives, he worked long nights to be sure area pollinators were kept safe.

Sadly, his bee colonies died off, but not from the chemicals being sprayed.Theobald said his research and experience showed that genetically modified seeds containing neonicotinoids and other chemicals instigated the decline of bee colonies. His expertise in this area is now called on by people around the world.

Niwot was mostly farmland when Theobald first arrived. What’s now Johnson Farms was a cornfield, and Somerset was alfalfa fields. He said initially he reluctantly became involved in helping to steer residential development by participating in community discussions.

It didn’t take long before Theobald was elected president of the Niwot Community Association (NCA). He acknowledged there were several divisive issues during those days. But he quickly added, compromises were made and community members maintained respectful, friendly relationships as they navigated the changes.

“We all knew growth was coming, and we didn’t have the right to prohibit landowners from profiting from their own land. There’s part of the county comprehensive plan that specifies the preservation of the semi-rural character of Niwot,” Theobald said. “That was my objective.”

While he had hoped Niwot would consist of large lots, like “mini farms” with chickens, ducks and sheep, it didn’t unfold that way and instead became suburban.

“I don’t want to seem too critical about that, because a lot of the new people who came have become lifelong friends and were it not for the growth they never would have entered my life.”

One of those longtime friends is Biff Warren. "Tom was very active in the NCA and was instrumental in establishing trails in and around Niwot. Subdivisions in unincorporated Boulder County were growing fast, and Tom led the NCA in negotiating with Boulder County to accept a limited number of Transferable Development Rights,” Warren said. “If I recall correctly, the number of housing units that could be transferred to land adjacent to existing Niwot subdivisions was 73, with the condition that they come from properties that would then become open space, either through purchase, or through conservation easements. Most people don't realize it, but Tom and others in the NCA back then are really responsible for keeping Niwot the small community surrounded by open space we know and love today."

In the early 1970s, the fire department was a volunteer organization and Theobald joined the force. Earning great respect from fellow volunteer firefighters, Theobald became the fire chief. Barbara was the secretary and the treasurer, and the two of them were a team making sure the department ran smoothly.

“Tom is a treasure,” Victoria Keen, longtime Niwot resident wrote. “Many of the relatively new folks in town don't know him and his incredible depth and breadth of knowledge.”

Warren recalled a story about Theobald’s kindness, “A few years ago I had a swarm of bees in my backyard, right before my son's wedding with a lot of people coming over. I called Tom for advice, and he was over the next day to remove them. He refused any payment, and told me to make a donation to Niwot Youth Sports instead, which I did."

A year of beekeeping adventures journaled in letters to his mother prompted Theobald to write a column in the Niwot Recorder. The popularity of his columns led to a 27 year stint in the agricultural newspaper, The Fence Post, where Theobald created a collection of over 1300 columns.

You’ll still find him outdoors every day working in his backyard, tending to his thriving vegetable garden, his chickens, and splitting firewood to heat his home.

When he’s not being physically active, he’s engaged intellectually communicating with people internationally about bees and the detrimental effects of agricultural chemicals. He testifies at county commissioner hearings and meets with local stakeholders helping to protect all beings on the planet.

Fellow Niwotians, Brad and Jane Langdon wrote, “After devoting years to supporting the preservation of the quiet, historic community of Niwot, Tom turned his devotion to educating people of the deadly effects of pesticides on bees, long before it was in the mainstream news. Tom perseveres alone, without fanfare. We love him for his passion for what is right. Tom is one of the precious “old timers” of Niwot and a nationally known “bee whisperer.” Tom maintains a great sense of humor in spite of the plight of his friends, the bees.”

Theobald’s wife Barbara passed away in 2006 and is buried in the Niwot cemetery. He continues his community activity as a member of the Niwot Cemetery Association. Theobald’s daughter, Tracy Briggs, her husband Brian, and their daughters Justine and Erin live in Berthoud and the family enjoys spending time together.

Are hand dipped beeswax candles still available? I was given two pair of these made by The Niwot Honey Farm and Tom Theobald. They are wonderful! Please send info on how I might get more. Thank you.