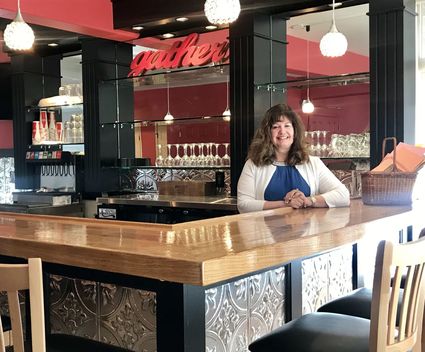 Restaurateur Annie Vick stands behind the newly remodeled bar at the eighth location of Pinocchio’s Incredible Italian, soon to open in Niwot at 105 2nd Avenue.

Inviting tables covered in red-checkered linens, padded stools in a neat row at the renovated bar, and a pristine double-wide range and gleaming convection oven in the immaculate galley kitchen indicate the debut of Niwot’s Pinocchio’s Incredible Italian eatery is getting very close.

Restaurateur Annie Vick said to expect the enticing scents of garlicky marinara and freshly baked cakes and brownies by the first week of July. Aside from a few finishing touches like the installation of back wall booths and hanging up the restaurant’s signature romantic black and white photographs, the next step before opening is for the health department to give its stamp of approval. After that, Vick said, things will quickly come together.

In the meantime, the establishment’s atmosphere is filled with anticipation even as the space sits empty, thanks to a facelift that included painting the walls an evocative red, installing fun faceted light fixtures overhead and laying new carpeting underfoot, enhancing the bar with decorative accents, creating a large workspace for servers, and setting up a dessert case that will magnetize customers as soon as they enter the bistro.

The restaurant feels very spacious and will comfortably seat 100 customers, including the outside patio. Vick said in addition to table service, carry out will be a big part of the business. Reservations will be accepted and one of the dining rooms may be closed off to accommodate private parties.

Niwot will be Pinocchio’s eighth location - the others are in Longmont (2 locations), Broomfield, Brighton, Loveland, Frederick, and Superior. Vick created the Italian concept establishment in Longmont in 2003. With the launching of Niwot Pinocchio’s, she and her family will be running five of those locations and remaining three are franchises.

Each location bakes its own desserts and cooks its dishes onsite, making for super-fresh offerings. There are no fryers in order to avoid the infusion of greasiness into the space, and tap beer isn’t served because beer residue in the drains can also permeate. It’s an intentional decision so that the restaurant has only the aroma of freshly cooked fare in the air.

“No tip Tuesdays” have become a company-wide tradition for the restaurant. Every Tuesday Pinocchio’s provides servers with 20 percent of guests’ checks while any gratuities left by customers are put toward a cause that varies from month to month. Tips given in May totaled $5,000 and were donated to veterans’ causes and in June, Tuesday tips are earmarked for suicide and domestic violence prevention organizations.

Tuesdays through Fridays, the restaurant will open at 11 a.m. to serve lunch and dinner. On Saturdays and Sundays, breakfast is served starting at 9 a.m. The restaurant is closed on Mondays. Watch for the restaurant to open in Niwot on or around Tuesday, July 2.