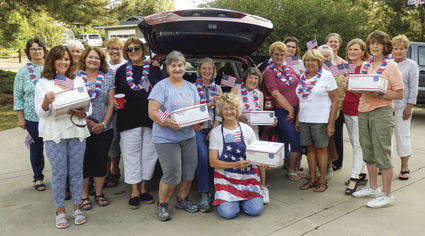 The co-founder of the Niwot Patriotic Cookie Moms will serve as the Niwot July 4 parade Grand Marshal, an honor given by the Niwot Community Association board which sponsors and organizes the parade. She has asked the entire cookie moms group – about 40 strong – to walk behind the grand marshal’s car in the parade.

“I was just utterly shocked to receive this honor,” Strecker said. “I am not the only one who helps in this effort. It’s really a group effort, but the most important part is that we do this for our men and women on military deployment.”

Showing love for the United States and supporting military members is a top priority for Strecker. She likes to quote John Wayne’s words… “Sure I wave the American flag. Do you know a better flag to wave? Sure I love my country with all her faults. I’m not ashamed of that, never have been and never will be.”

Nominator Riki Frea called Strecker “the most patriotic woman I have ever met” and “devoted” to leading the group of generous cookie volunteers. “I can’t think of a better way or time to recognize her efforts to support so many service men and women than on our country’s birthday,” she wrote.

Strecker is being honored not only for her work with the Niwot Patriotic Cookie Moms, but also for her volunteering in the Niwot community. She has been a 4-H project leader for more than 30 years, where she taught pie baking, yeast and quick breads, cake decorating and entomology.

“I love teaching by doing, and I’ve probably taught hundreds of kids some skills,” Strecker said. “And many of those kids have won and gone on to compete in the Colorado State Fair.”

Strecker and her husband, Don, have lived in Niwot since 1978. She’s pitched in at many community events and helped with the Niwot Easter Egg Hunt for many years. Her daughter was the Easter Bunny (shhh) for a few years. “It’s so wonderful to see the kids find eggs and have fun!” she said.

In addition, Strecker is a member and volunteer with the Heart of Longmont Church, the Longmont Historical Society and the Daughters of the American Revolution. She participates in the Veteran’s Day Longmont parade and participates in Memorial Day ceremonies at Longmont Cemetery.

Strecker is a former farm girl raised in Minnesota on the family homestead. She and her husband were drawn to the Niwot area when he came to Boulder to work for Ball Aerospace. Boulder was “too much of a city” for Strecker, so they found a home in small town Niwot.

“All I needed to be happy was a kitchen sink that faced east, a half-acre lot so I could have a big garden, and a place for a clothesline,” Strecker said. “I knew I was in the right place when my neighbor, a farmer, shared his rhubarb plants with me.”

Strecker loves the people in Niwot too. “Everyone who lives here has lived someplace else, so they appreciate the small town feel and values of Niwot,” she said. “Our July 4 parade is special because it brings out patriotic feelings in a non-partisan way. We need that, and we have it in Niwot.”

Strecker’s involvement with cookies – lots of them -- started in 2003 by sending goodies to her military daughters. All three have served or currently serve in the U.S. Army and their husbands are officers currently on active duty. The Niwot cookie moms group began after Strecker’s neighbor, Pat Murphy, found out she was sending those treats. Murphy’s sister in Illinois was doing the same thing, and she figured she and Strecker could gather a group in Niwot, Strecker said.

“We started with about six or seven of us local gals, and we baked the cookies in Pat’s kitchen,” Strecker said. “Now we have an email list of about 45 women, and about 20 show up to pack boxes, depending on their schedules.”

“We don’t bake in Pat’s kitchen anymore because it’s grown so large,” Strecker said. “Now everyone bakes at home and brings it in to fill the boxes.” The group fills 25 to 30 boxes each time they send them. They try to get boxes shipped to the deployed military members five times a year near holidays.

“It’s a lot like an old fashioned quilting bee, but without the quilt,” Strecker laughed. “We talk and visit as we pack the boxes.”

At a June 17 packing session, 25 boxes were laid out and women walked by, adding their donations to the boxes. Strecker, decked out in her signature red, white and blue apron, checked on progress and decided that the group could fill five more boxes. “We’re definitely overflowing here,” she said.

In addition to a wide variety of cookies, the boxes include gum, lip balm, candy, cracker snacks, beef jerky, nuts and dried fruit, playing cards and toothbrushes and toothpaste. Each box also contains a signed letter to the service men and women explaining the group and thanking them for their service.

Sometimes there are additions such as drawings and cards from Niwot Elementary Girl Scouts and children at local daycare centers, and a copy of the Left Hand Valley Courier newspaper. There is often a small flag included. Recently, the group has included small, individually packaged white stars that have been cut out of old, retired American flags, part of the Stars for Our Troops program. Two cookie moms have taken on the task of decorating the inside of every box.

In the beginning, the boxes went to deployed service members who the ladies knew. As the years passed many of those military members came home, but the mission didn’t stop. Service men and women would pass on names and addresses of their friends in the units. The boxes are now sent to all branches of the military. Strecker is the keeper of the paperwork who collects all the military addresses and verifies them.

“We send to Afghanistan, Syria, Kuwait, Poland, Somalia/North Africa, Ukraine, South Korea and naval ships in the Middle East. I marvel that it only takes six or seven days to get to Afghanistan,” Strecker said.

The June 17 packing session had additional meaning for Strecker. The group packed a box destined for Afghanistan. He is the son of a former classmate in Strecker’s 4-H pie baking class as a teen. “I love that connection.” the former classmate said. 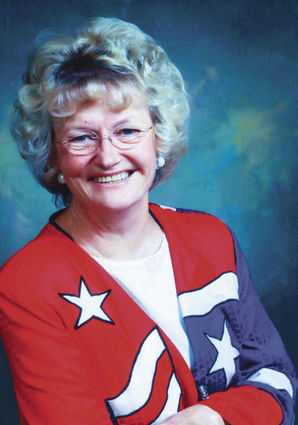 Strecker also takes the boxes to the Niwot Post Office herself, where the postmaster is “really accommodating,” she said. The boxes make it to the service men and women in “really good shape,” she said. “But once we did hear that some of the peanut brittle melted in the desert heat. They just took it into the air conditioning and it hardened right up!”

“We receive lots of letters from service men and women thanking us for remembering them,” Strecker said. “It really means a lot to them to be thought of and receive treats.”

Shipping the boxes is expensive. It cost a total of $981.20 for the last two shipments totaling 62 boxes. Donations raised by the tip jar at the July 4 pancake breakfast and at Rock & Rails (Aug. 8 this year) are used to pay for shipping.

“We really appreciate everyone who donates and helps out,” Strecker said. “People are so generous and wonderful. That’s what I love about this town and these people!”