Jack's Solar Garden given (the green) thumbs up 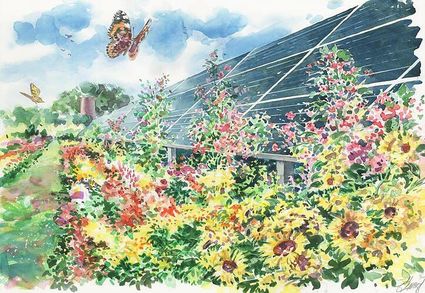 An artist’s rendition of Jack’s Solar Garden - a co-habitation of solar energy and agriculture. This month, the project was given the official go-ahead by Boulder County Commissioners.

Jack’s Solar Garden will now have its place in the sun. On June 13, Boulder County Commissioners unanimously gave their approval for co-owner Byron Kominek to commence with plans to build the county’s first of its kind co-mingling of solar power and agriculture. The farm property, which has been in Kominek’s family for three generations, is located at 8102 N. 95th Street, Longmont.

Commissioner Deb Gardner was the first to move to approve the solar garden, stating, “This is certainly the direction we need to be moving if we’re serious about meeting our goals around renewable energy and reduction in our carbon footprint.”

“It’s just the kind of project that we can be very proud of supporting here in Boulder County,” Commissioner Elise Jones said. “It fits with our whole culture of innovation and trying to be on the cutting edge of some of the challenges facing our society and climate change.” Commissioner Matt Jones also voiced his approval.

In reaction to the official 3-0 approval to move forward, Kominek said, “It felt like yet another weight was lifted from my shoulders. I felt very appreciative of the county commissioners having taken their time to consider Jack's Solar Garden and approve of our project in such glowing terms, especially from Elise Jones and Deb Gardner. Their words made me feel like I was on the right path.”

Elise Jones also stated that aesthetically, Kominek’s plans to forgo the usual chain link fence around solar panels in favor of vegetation, including a pollinator habitat, will go a long way in mitigating the visual impact of the project.

Researchers with Colorado State University, the University of Arizona, and the National Renewable Energy Labs will be partnering on the six-acre solar garden to monitor the effects of growing crops under the five acres of opaque solar panels. The benefits of their research for future projects of this kind were a big positive to the commissioners.

The project will deliver 1.2 megawatts of power to the Xcel Energy grid. The endeavor is being hailed as a “community solar garden” because the public and schools will be invited to tour the grounds, local artists will be encouraged to display their works, and a percentage of the power generated will be donated to low-income households and organizations.

During the hearing, Kominek said, “In discussions with NREL, CSU, and the University of Arizona, my understanding is that we will be the largest agri-voltaic project in Colorado.”

“As soon as we have enough interested subscribers, we'll sign an engineering, procurement, and construction contract to request a permit from Boulder County and then start to build Jack's Solar Garden,” Kominek said. Subscriptions are limited by the number of solar panels – 3,000 to be installed on the property.

Subscriptions are available to individuals and businesses on the Xcel Energy grid in exchange for credit to their monthly energy bills. If all goes according to plans, construction will begin by the end of October, with the system up and running in early 2020, Kominek projected.

Kominek will be holding a free farm tour from 2-3 p.m. on Sunday, June 30. Reservations are recommended as space is limited. RSVP to Byron@JackSolarGarden.com. To subscribe and learn more about the project, visit http://www.JacksSolarGarden.com.