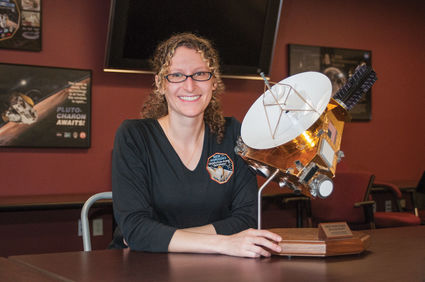 Niwotian Kelsi Singer is the recipient of the 2019 Harold C. Urey prize recognizing her work in impact cratering and in the geology and geophysics of icy worlds.

Niwotian Kelsi Singer is making international news as the 2019 Harold C. Urey Prize winner. The Urey Prize is awarded by the American Astronomical Society’s Division for Planetary Sciences to early-career scientists, of any nationality, to recognize and encourage exceptional accomplishments in planetary research. The winner must be either under age 37 or have earned a doctorate degree within the past six years.

Singer, 35, was nominated for the honor by a group of scientists working with her at Southwest Research Institute (SwRI), including associate vice-president of SwRI’s Space Science and Engineering Division and the principal investigator of the New Horizons mission, Alan Stern, also a Niwot resident.

“Kelsi was nominated because of her exceptional scientific talents, work ethic, and productivity,” Stern said.

Singer’s nomination recognized in particular her work in impact cratering and in the geology and geophysics of icy worlds. The prize committee said Singer’s work is “meticulous, rigorous, and insightful. In the best tradition of scientific brilliance, she examines data with an open mind, considers multiple theories, follows those theories to their logical conclusions, quantifies her uncertainties and applies healthy skepticism towards her results.”

Singer received the good news by phone, “I’m still a little bit in shock. I was mostly just really happy and very honored.”

Singer grew up in Denver and attended the University of Colorado, Boulder, earning a double bachelor’s degree in astronomy and astrology. She went on to earn a Ph.D. at Washington University in St. Louis, MO.

As she was finishing up her doctorate work, two years before New Horizons was due to arrive at Pluto, she had the opportunity to meet Stern. As luck would have it, he was looking for several post-doctorate students to join the team at SwRI’s Boulder offices. Her graduate school study of icy surfaces on the moons of Jupiter and Saturn was the perfect fit for New Horizon’s exploration of Pluto.

She happily returned to Colorado, and after first living in Boulder, moved to Niwot three years ago.

Singer said, “I really like the small town feel of Niwot, the downtown, and Cottonwood shopping area. It’s not too far from Boulder and was just right for me.”

Exploring the solar system was of interest to Singer from a young age. “I didn’t always know that I would keep learning about planets, but when I went to CU as an undergrad, they had this great program where you could come about a month before your freshman school year started and you could do research with someone. I did astronomy research, and I just kept doing it.”

The interdisciplinary aspects of studying planets are what appeal to Singer, studying a mix of astronomy and geology. She’s always enjoyed astrobiology, the possibility of habitable places outside of earth.

In her capacity as a senior research scientist she’s involved with analyzing data, helping to plan the New Horizons’ mission, including what observations to take, management responsibilities such as budgets, and working toward extended mission status for New Horizons. New Horizons’ data is still coming in from the flyby on January 1, 2019 of the furthest object in our solar system, Ultima Thule.

Being on the cutting edge of planetary research is thrilling for Singer. ”I will fully admit that I did not expect this. Being on these spacecraft missions is really an honor because you get to see some of these pictures of places in our solar system for the first time.” Exploring Pluto has resulted in potential findings that are one of a kind, such as cryo-volcanos, an icy volcano versus rocky volcanoes.

Singer and Stern are submitting a proposal to NASA to once again explore where no one else has. The mission’s name is under wraps, but it involves going to mysterious types of objects called centaurs, which contain characteristics of both comets and asteroids. Singer would be the deputy principal investigator on the mission.

Stern said, "I expect Kelsi to continue increasing her scientific impact and her role in the exploration of our solar system. Who knows how much her impact will be felt in the 2020s, ‘30s, and ‘40s? Even the sky isn’t the limit."