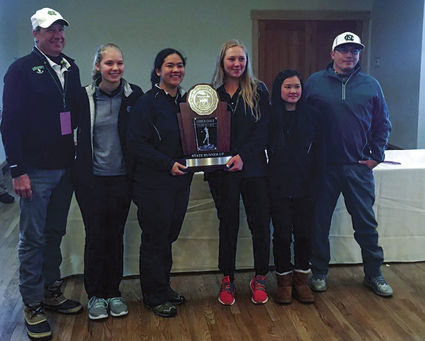 The 2019 season was full of remarkable moments for the Niwot girls golf team, so when the Cougars claimed the runner-up title at this year’s Class 4A championships at Pelican Lakes, Head Coach Ed Weaver wasn’t terribly surprised.

“I felt good about the team all year,” a jubilant Weaver said after his team finished 21 strokes behind the defending champion Windsor Wizards at the snow-shortened state tournament on May 20. “I hate to say I didn’t think we could beat Windsor, but I didn’t think we could beat Windsor. I told the girls, ‘You have to play really, really good and they have to play really bad for us to have a chance,’ and to be honest, I didn’t want to win that way. I wanted them to play well and us to play even better.”

Though Weaver didn’t quite get his wish, he did get a resilient round out of his players, who were battling wintry conditions on the course, in addition to the other competitors. Pacing the Cougars was the team’s number one, Julia Solem, who carded an 89 (+17) for the day and finished in a three-way tie for 15th place. The junior stumbled badly early on—with a triple-bogey on the par-5 second hole and a double-bogey on three—but evened out for the remainder of the round, improving by five shots on the back nine.

On her heels was senior Laure Bourgin, Niwot’s number four, who finished in a tie for 18th overall, much to the delight of Weaver.

“Laure had a great round. She shot a 90 with a seven on the last hole. I said to her afterwards, ‘This isn’t your lowest scoring round, but it’s the best round of golf you’ve ever played.’ It was a cool moment.”

It was a different story for Niwot’s number two player Halie Ostrom, who struggled for consistency on the day. After losing four balls and carding a gut-wrenching 15 on the second hole—putting her 11 strokes over—the sophomore shot par on four of the next five holes. She then posted three triple-bogeys—and the team’s only birdie—over the next six holes. Ostrom finished the day with a 96 (+24), which was good for 31st place overall.

Afterwards, Weaver said he was impressed with how well the 10th-grader handled the adversity, which wasn’t always the case during the regular season.

“For her to come back after that and make two pars is phenomenal,” he said. “She didn’t have a meltdown or throw a fit. Halie is the kind of girl that has to experience something to get it, and I think she experienced it.”

Last but not least was freshman Sydney Rothstein, who placed 28th overall in her state tournament debut and can’t wait to get back out on the course next year, according to Weaver.

“I’m not even worried about her a little bit,” he said. “She’s got a great attitude, and a great love of the game.”

In total, just seven strokes separated the four Niwot players in the final standings, allowing them to leapfrog teams such as Holy Family and Coronado, which had top-10 finishers, as well as the players among the highest scoring on the day.

“That’s huge. Almost every team has a really good one and a really good two, but at three it starts getting a little iffy. But we’ve been fortunate all season.”

Though he will be losing one of the key pieces of the puzzle in Bourgin to graduation, Weaver said it’s difficult to contain his excitement about next year. With three state-experienced players due back on the team in 2020, Niwot will almost certainly be considered a top contender for the title. For the coach, however, titles and trophies are just a “bonus” for completing his true mission.

“Sydney said she’s never had more love for the game than she does right now because of what the team’s doing. And that’s what it’s all about. If they come out of school with the ability to play and a love for the game, I’ve done my job.”