Niwot girls run away with Class 4A title 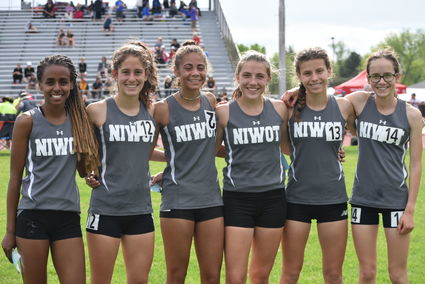 The boys may have waited until the final event of the meet to claim their team title, but for the Niwot girls, the Class 4A track and field championship was theirs to lose from the start.

Shortly before 9 a.m. on the opening morning of the three-day state meet at Jeffco Stadium in Lakewood, Niwot junior Samrawit Dishon crossed the finish line of the girls 3200 meter race with a season-best time of 10 minutes, 53.76 seconds to claim second place overall and score the Cougars’ first eight points. She was followed in quick succession by sophomore Lucca Fulkerson (11:03.97) in fourth, senior Layla Roebke (11:05.20) in fifth, and junior Joelle McDonald (11:16.98) in eighth. Niwot earned a total of 21 points for the event, and took a lead in the team standings that would stand for the entire weekend.

“I think the only reason I ran so good is, because five of my other teammates were in it,” she said. Niwot freshmen Eva Klingbeil and Amelia Philofsky also competed, finishing 14th and 15th respectively. “It was like the state championships for cross-country.”

Dishon’s words would prove prophetic. Behind a host of inspired individual performances, the Cougars went on to score 123 points for the weekend and clinch their first state title since 2015.

“We knew we had the big points and the numbers in the off-season to run what they did today, but it’s still amazing,” Niwot distance coach Kelly Christiansen said of the girls’ record-setting performance. “I’ve cried multiple times over the last few days. It’s pretty special for the kids, who have put in so much work.”

A sizable share of those big points came from sophomore standout Taylor James, who picked up three individual titles for the year and helped the girls 4x400 relay to another. Along the way, she also broke a state record held by another Niwot standout.

“The fact that it was Elise Cranny’s record was so amazing,” James said after setting the new state mark in the 800m, with a time of 2:08.29, beating Cranny’s 2:08.50. “To see that I could stand up against her is just truly amazing and I would have never thought last year or even at the beginning of this year that I could ever compare to her. It’s just such an honor to be able to try to live up to her legendary spot on the team.”

James’ other titles came in the 200- (24.76) and 400m (54.25) dashes, both with season-best times. She was slotted to compete in the high jump, but scratched in order to replace injured senior Maggie Smith in the 1,600m relay. In that event, she ran the anchor leg and led Niwot to a win with a time of 3:54.85, more than four seconds off their preliminary finish.

“She scratched an individual event to help her team out in the 4x400—that’s who Taylor James is,” Niwot head coach Maurice Henriques said after she broke his former champion’s record. He went on to call the sophomore “special.” “I’ve been coaching for 20 years, and coached a lot of girls. She reminds me of Sarah Coco at Fairview as far as the range. Elise Cranny was special. Griffin Matthew was special. So there’s been a lot of talent come through. But Taylor could be the best ever.”

One of the most memorable moments for the Niwot girls came in the 100-meter hurdles, where junior Elise Gillett broke the 15 second mark (14.96) to take second overall, and then had an emotional reunion with older sister and former Niwot star Mary Gillett, who now competes for Stanford, but was able to sneak away for a surprise visit to the meet.

“It was totally special,” the younger Gillett said afterwards. “All the work coming down to this one final meet, it feels really rewarding.”

Gillett also took the silver medal with the 4x400 relay team, with Princess Sagala, Julea Trank, and Kayla Nowlin. She also qualified for the long jump, but was unable to compete due to a conflict with IB testing.

For Henriques, who has now coached four Gillett sisters, seeing Elise emerge as one of Niwot’s top hurdlers has been particularly gratifying.

“It was 11 months of work,” he said of her hard-fought success in the state meet. “She was one of the first kids to text me after the state meet last year, and said ‘My goal is to win a state championship in short hurdles.’ It’s been a goal for her, and she’s been on it.

“I think she loved competing with her sister,” he continued, “but she’s making her own identity with her own event.”

In all, nine separate Niwot individuals made it to the podium over the three-day event, as did all five relays. Senior Erin Carroll was seventh overall in the pole vault, clearing 9-feet, 7-inches. Junior Julea Trank qualified for her first ever 100m finals, finishing eighth overall. She also ran on the second-place 4x100 and the title-winning 4x200 relay team, joining sister Maedee Trank as a Niwot champion. On May 4, Julea’s twin won her second individual tennis title at No. 2 doubles.

The Niwot girls will be losing some key components of this title team to graduation, including Timbang, Nowlin and Roebke, but runners and coaches alike fully expect the Cougars to contend for the 2020 title, just as they have every year since 2013. Until then, Henriques and Christensen plan to continue developing their team’s greatest strengths: a willingness to work hard and to love their teammates.

“This is a place for community and family,” Henriques said. “You see Mary [Gillett], Alexis Carroll, and Sophie Grant all come back because we’re a family, and that’s what we want to be. All of the coaches and kids enjoy the process. We’ll enjoy this—to win on both sides is pretty special—and then get back to work on Tuesday.” 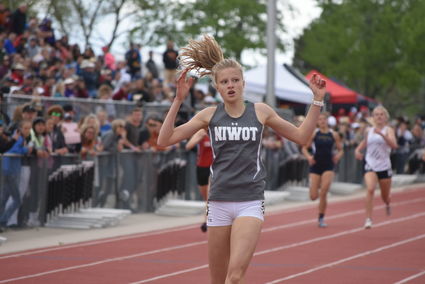 Niwot’s Taylor James crosses the finish line in the girls 4x400 finals well ahead of her competitors.