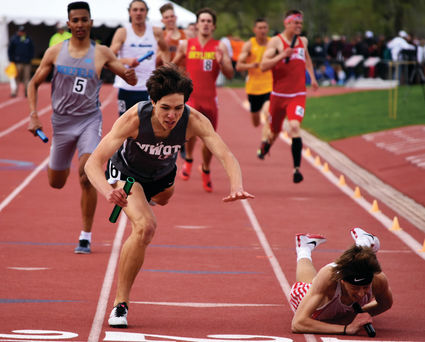 Jack Kenkel makes a dramatic dive for the finish line to win the boys 4x400 relay finals for Niwot at the Class 4A state championships on May 18. The win gave the Cougars enough points to overcome Pueblo East in the final team standings and clinch the track and field team title for the first time in school history.

All eyes in Jeffco Stadium were on Niwot junior Jack Kenkel as he and Durango's Aidan Fitzgerald raced neck-and-neck down the stretch in the final leg of the 4×400 meter relay, the last event of the Class 4A state track and field championships. Down by four points in the team standings, the Cougar relay team of Kenkel, Jensen Douillard, Milo Ostwald and Nolan Johan needed a fifth place or better finish to surpass Pueblo East and claim their first ever team title.

The crowd held its collective breath as the two front runners made a leap for the finish line, then broke into thunderous cheers as Kenkel crossed ahead of the Durango runner to clinch the win for Niwot with a season-best time of 3 minutes, 22.86 seconds.

"It was unbelievable, it was epic; it was the word on the back of our t-shirts-'relentless'," Cougar head coach Maurice Henriques said of the Hollywoodesque finale. "I told Jack before we ran, 'If you have to dive to win, I'll pay for your medical stuff,' then he dived, and I was just joking! But it was awesome to see."

The inspired relay victory capped off a remarkable state meet for the Niwot boys, who finished with 66 points and a comfortable six-point margin over the Eagles in the final team standings. Along the way, the Cougars picked up three individual event titles and a host of top-five medals, an auspicious accomplishment for a team used to watching the state meet from the sidelines.

"This boys team scored zero points two years ago, 21 last year, and to come and win it as a group, and to win it that way-just nickle and diming and people stepping up, things not going our way-it's pretty cool," Henriques said.

One of those who stepped up was junior standout Cruz Culpepper, who supplemented his Class 4A cross-country title with a pair of track championships. In the 800m, he came from behind in the final stretch to claim the title with a time of 1:52.93, the fastest in the state of Colorado this year. The next day, he won the 1,600m (4:16.69) running with teammate and training partner Ares Reading, who was fifth (4:21.92).

"Once he won that 800, Cruz looked like his old self in the mile," distance coach Kelly Christiansen said. "And having Ares come out and finally having a good race in the mile, I think in a lot of ways launched Cruz to deliver."

Not everything went right for the Niwot boys, however, and that had Henriques anxiously adding and re-adding scores as the team competition heated up on Saturday. No Cougars advanced in the 200m or 400m races, and Niwot competitors finished out of the scoring in pole vault and jumping events. In the 300m hurdles preliminary, senior Nolan Johan failed to qualify for the finals after he knocked over a hurdle which interfered with another competitor.

That put the pressure on Jensen Douillard, Johan's longtime friend and closest competitor, who proved more than up to the task. Taking more than a second off his previous personal best in the 300m hurdles, the senior finished in 39.47 seconds, which was good for third place overall and kept the Cougars within reach of Pueblo East.

"Basically that whole race was trying to get points for him and doing it for him," Douillard said of Johan. "We've been neck and neck since literally freshman year, and that was for him."

Johan got his own shot of redemption in the 4×400 final, where he helped keep the Cougars out front as the second leg of the relay.

"This is an individual event, but it's with a team, because it's the four of us guys, and we're not relying on one person" he said afterwards. "So it's a team win. It definitely made up for the hurdles."

For coach Henriques and his runners, the Niwot boys' transformation from afterthought to a state champion has been nothing short of remarkable. It is also a resounding vindication of the squad's newfound dedication to rigorous training and team-building, the twin pillars of the Niwot girls' historic success.

"It's trusting the process," Douillard said. "Our freshman year, no one scored a point for Niwot. No one was looking at the Niwot boys. But we've been working all year-winter, summer, fall-it's an all-year sport, and we've put in the work and trusted the process." 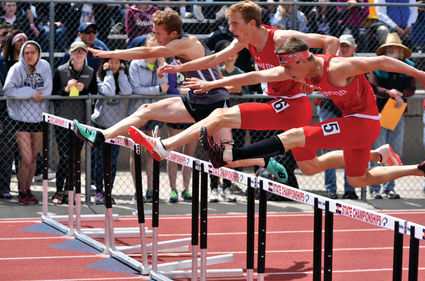 Jensen Douillard (far left) took third overall in the 300m hurdles with a season-best time of 39.47, his first sub-40 time of the year.