With just a handful of seniors on their 40-man roster, the Silver Creek boys swim and dive team skews decidedly young in 2019, but that hasn’t stopped it from claiming the top spot in Class 4A’s regular season rankings. Nor did it stop the Raptors from dominating at last weekend’s Northern Conference championships, where they claimed a fifth straight team title after outscoring their nearest opponent by more than 200 points. Now longtime head coach Debbie Stewart is hoping that this youthful energy will be enough to propel her team to a top finish at the upcoming state championships.

“Each year, I think we’re graduating too many kids and it will take some building, but we brought in a lot of talented freshmen this season,” she said after the conference finals at Mountain View Aquatic Center on May 11th.  “And they stepped up. We got three more state qualifiers that had never qualified before today, so we’re up to 18 state qualifiers, and when we came into this, we only had 15. It’s very exciting.”

Silver Creek was bolstered by a swarm of top-five finishes on the day—including a trio of individual titles—and ended the meet with 892 points, ahead of Greeley West in second (672), Broomfield in third (638), and defending state champion Windsor in fourth (604). For Stewart, her team’s lopsided win was the result of a careful strategy, honed over many seasons.

“Depth has always been Silver Creek’s deal,” she said of the squad, which also includes students from Niwot High. “Broomfield’s got a great team, so does Greeley West, and they’ve got top talent, but what helps us is the depth. And I’ve always said that our divers are key. Last year, we placed so high at state because we had three divers in the top eight.”

One of those three was Matthew Teta, who captured the 2019 conference diving title with a season-high 472.05 points and was later honored as the Northern Conference Diver of the Year. The senior also made some Raptor history along the way, according to Stewart.

“He did that second-to-last dive, and it was a super-hard dive, and no other diver from Silver Creek has ever pulled off something with that high of a dd [degree of difficulty].”

Silver Creek’s other two state divers graduated in 2018, but Teta won’t be headed back to state alone. Freshman Jacob Dowlin also made the cut this year, and then finished out the regular season by taking third overall in the conference championships, with 404.20 points. Their freshman teammate Baylor Reid, who fell just short of advancing to state, placed sixth (296.10) overall. At the end of the meet, Silver Creek assistant Kyle Stewart, Debbie Stewart’s son, was honored as conference Dive Coach of the Year.

For all the talk of youth, it was Teta and another senior—Hayden Dickinson—who clinched the win for Silver Creek. Dickinson claimed the conference title in the 100-yard freestyle, with a season-best time of 49.42 seconds, edging out teammate Ian Curd (49.93), who finished in third. Dickinson then swam on the title-winning 200 freestyle relay team with Curd and sophomores Pierce Bigelow and Connor Hassert. The senior also took fifth overall in the 200 freestyle with another season-best time of 1:49.33, nearly 2.5 seconds faster than his preliminary time.

“We’ve had a hard time over the years coming back on the second day, and when you’re at conference, in order to get that championship, you’ve got to get in those top eight places,” Stewart said. “So yesterday they stepped up and got into those top eight places, but it’s a lot of times hard to come back because there’s other peak swimmers.”

That news hasn’t yet trickled down to a couple of Stewart’s newest distance swimmers, who posted last-minute qualifying marks with their finals performances on Saturday. Freshman Brandon Lis shaved more than six seconds off his preliminary time in the 500 freestyle to finish in 5:31.33, which was good for both a state bid and a ninth-place overall finish. He will be joined by fellow ninth-graders Vincent Vu 5:31.52, who also qualified on Saturday, and Connor Wagner (5:21.49), who finished sixth overall in the conference finals. 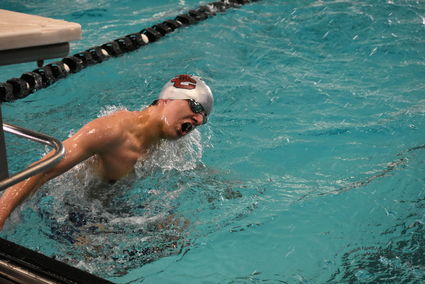 Stewart will be taking a more compact team to this year’s Class 4A state meet, where Discovery Canyon and conference rival Greeley West will among the top contenders for the team title.  Though she stopped short of predicting a win for the surging Raptors, she also knows the power of a deep roster.

“I’ve always said when our divers have been top in the state, it’s helped the whole team, because we’re in every single event,” she said.  “So, my goal, if we can stay in the top five, I’ll be very, very happy.”

The 2019 Class 4A state championships will be held on May 17-18 at the Veterans Memorial Aquatic Center in Thornton.