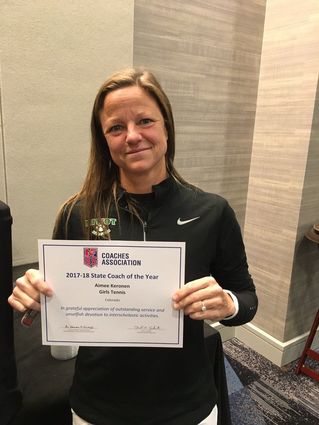 Niwot’s Aimee Keronen was honored as a Colorado Coach of the Year by the National Federation of State High School Associations (NFHS).

Ward was selected for induction into the Hall’s 2018 class back in January, due to her decades-long advocacy on behalf of girls and women in high school athletics and involvement with Colorado Coaches of Girls Sports and Sportswomen of Colorado. She also has a coaching career spanning nearly 30-years, and recorded her 300th career win for Niwot on January 25th.

Keronen, who teaches P.E. at Niwot, is in her sixth season as head tennis coach. Last year, she led the Cougars to the Class 4A state title, the first championship for the school since 2015.

Though they lost two key pieces of the championship team to graduation, the Cougars went undefeated in the 2019 regular season, and head into the Region 4 tournament on May 1 with a good chance to repeat as champions.

“First and foremost is her relationship with kids, inside and outside of the building,” he said. “She’s a kid magnet—they flock to her class, and they come out to tennis to support her there. She’s done such a nice job of establishing excellence within the program. They want to be good, they want to be better, and they’re always doing the work towards it. I think it’s easier to maintain that than build it, and she’s certainly got it to a place where it’s just maintenance.” 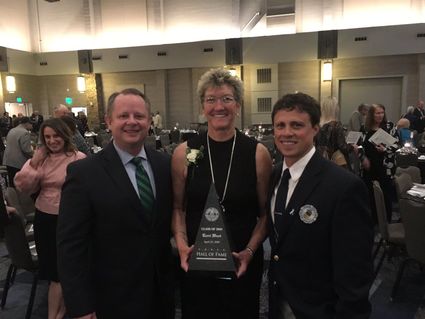 McBride said that Hejl departed for family reasons, and there are “no hard feelings” between the school and the former coach.

The Cougars went just 1-22 during Hejl’s first season at the helm, but managed eight wins in 2019 and narrowly missed a postseason berth.

Incoming Niwot athletic director Kevin Clark, who will take over for McBride when he becomes the district athletic director later this year, said there’s no firm time frame for a new hire, but he, McBride and Principal Rauschkolb will start the process in the coming weeks.

“We’ll take some time to see if we can align any teaching positions with that,” he said. “We’ll wait for the next few weeks to play out.”