Sailing away with self-esteem 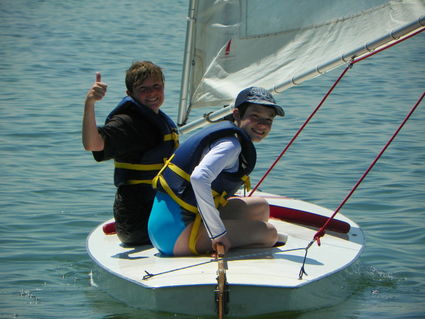 ABLE to Sail helps kids realize the “self” in self-esteem.

It’s the simple, powerful message that ABLE to Sail, a local non-profit, works diligently to impart into the belief systems of the teens who take part in their sailing camps. Today’s teenagers face more challenges than any have for generations—school shootings and social media, for example—often resulting in drug use, suicide and poor life experiences.

ABLE (A Better Life Experience) to Sail was founded in 2012 by Diane McKinney with the sole aim to help each teen realize the “self” in self-esteem.

“Our main mission is to prevent teen suicide and teen drug use by changing the negative thought patterns that these kids have in their heads,” said McKinney, herself a person in recovery.

ABLE was initially founded, in part, when a young friend of McKinney’s died from an opiate and cocaine overdose in 2003. The friend, from Niwot, was very similar to McKinney—a star athlete, and top of her class at Niwot High.

“She was what I call a ‘real looking-good kid’,” said McKinney, who was herself an Olympic-level soccer goalie with a full ride to Harvard. “But she had those negative belief patterns. She was the youngest person I’d ever known to die from an overdose. You can’t stop the behavior unless you stop the reason you choose that behavior,” said McKinney.

Despite her high-achiever status at a young age, McKinney never felt like she was good enough, and as a result spent decades of her life in patterns of addiction and recovery. It was during her fifth stint in rehab that she realized the most basic truth she needed to understand when it came from the lips of a guest speaker at a conference, where McKinney was one of the 1,500 in attendance.

“You are enough,” were the words spoken by Cynthia James, a former Hollywood actress who became a motivational speaker, empowerment coach and best-selling author. The words she spoke to the crowd went to McKinney’s core.

“She became my mentor and my teacher,” said McKinney, “and she’s even going to be the M.C. at our upcoming event.”

The May 19 Rock the Boat event is a family-friendly benefit concert at Union Reservoir in Longmont featuring Hazel Miller, Coco Brown and Sheryl Renee. McKinney also promises games such as giant cornhole, giant Jenga and giant beer pong, which she asserts is not a typo.

“I have a giant teddy bear sitting in the passenger seat of my car right now, and there are two more at home,” she laughed.

Giant games and enormous teddy bears aside, McKinney’s mission is very serious, and she aims to reach as many teens as she can with the resources she has.

“Every kid is an at-risk kid,” she said, “You need to know that you matter, that you are enough. Just because the people in your life are unable to tell you or show you that in a way you can understand, it does not make it untrue. You are enough, and we need you.”

The upcoming benefit is McKinney’s first-ever fundraiser, and while it’s been exhausting, she wants to raise the awareness and the funds to help as many kids as possible.

“Teen drug use and suicide is happening everywhere. I want to bring awareness that we can do something about that, that ABLE does something about that,” said McKinney. “My main directive from the beginning has been to never let cost be a barrier to a kid getting in this camp. We don’t have a scholarship fund. I just have a really big heart. Fifty-percent of our kids can’t afford to come, and I let them come anyway.”

When asked why she picked sailing as the sport to use in an empowerment camp, McKinney said it was a no-brainer. 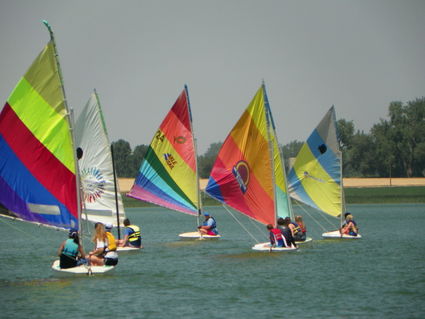 ABLE to Sail prepares kids to rely on themselves for self-esteem, not on external factors.

“It’s a profoundly effective method, because the kids don’t know anything about sailing, so they are vulnerable. When I created this program, it practically wrote itself. What do you do to steer a boat left? You turn it right. And that’s how I changed my life, by changing my thinking. I didn’t know I could change my thinking, and then I realized that my mind was a wild animal that I needed to train. That was my path out of addiction and those negative thought patterns. And just like in sailing, you’ve got to be looking forward to let go of the past.”

“There’s a physiology of beliefs in our brain, so it really is unbuilding those roads and building new ones, and making the choice to build new ones.”

“In camp, we talk about how we rewire our brains, and when you know you can rewire it, then you’re really at choice. There is so much freedom in knowing you have a choice,” she said.

“We are really an empowerment camp, and in between these talks that help them change their belief systems about themselves, they get to learn to sail.”

The Rock the Boat benefit concert will be held at Longmont’s Union Reservoir on Sunday, May 19 from 3 to 7 pm. For tickets to the benefit—kids under 12 are free—and more information about ABLE to Sail, visit http://www.abletosail.org.