Tiny homes just part of a big project for Vets 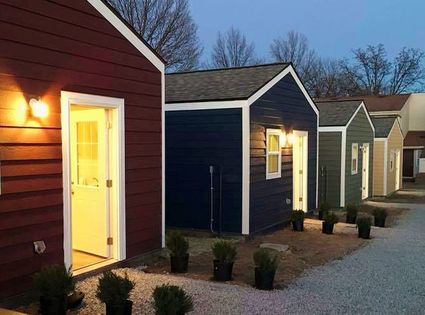 A row of tiny houses in Kansas City’s Veterans Village is part of the Veterans Community Project, a program that’s coming to Longmont to help our area’s veterans.

Tiny homes have an undeniable charm about them. They’re - well, let’s just say it – they’re super cute. An entire neighborhood of tiny homes is downright adorable. But for one particular community, the tininess is ultra-lovable, because it’s about opening up a whole new world for each resident. The people living in those homes were simply trying to make it through another day, and they were suffering. Now they’re being helped big-time, and deservedly so.

The residents are veterans who took an oath when they enlisted to protect our country, and as a result of their military service, they gave up so much physically and emotionally. Following their service, they struggled to survive whether on the streets or on the skids, living a life where making ends meet and staying healthy seemed almost impossible. Veterans Community Project (VCP), based in Kansas City, is working to change those circumstances, and soon Longmont will also have a VCP program.

Founders of VCP, Mark Solomon, Chris Stout, Brandon Mixon, and Bryan Meyer, are combat veterans. Five years ago the friends decided “to do something to able to say yes to veterans, and particularly homeless veterans” and they came up with the Veterans Village tiny home concept. The first subdivision of 49 homes in Kansas is more than halfway complete. In the last two years, the program has helped 7,000 veterans.

The story of bringing VCP to Longmont starts with Niwot resident Kevin Mulshine. Mulshine learned of Longmont’s Mayor Brian Bagley proclamation to help homeless veterans. Although the number is most likely underestimated, the city identified 20 to 25 homeless vets. Councilwoman Bonnie Finley has taken charge of the project for the city of Longmont.

“The mayor put us on a committee to help find land, but we kept on having NIMBY [not in my backyard] issues,” Mulshine said. Mulshine’s company, HMS Development, was building a subdivision of townhomes in south Longmont and the mayor suggested that the right place for veterans’ transitional housing might be part of that existing development. Mulshine’s knee-jerk reaction was that it wouldn’t work to have a “homeless facility near a nice amenitized community.” Mulshine said Bagley challenged him on that conclusion. So Mulshine went on the road to Virginia, California, and Florida to research other veterans’ transitional housing.

“Our last stop was Kansas City, and when you go to Kansas City, it’s infectious, because the veterans are so amazing. It’s always teaming with volunteers and the level of energy there is as I said, just infectious. It was in that moment to me, and I’m serious about this, because there are townhomes right next door, that I said I could live next door to this in a heartbeat. And we thought maybe it’s time that people accept that the new amenity in the community was going to be compassion.”

Mulshine’s deep respect for the founders of VCP and how profoundly touched he is from getting to know the veterans making their way through the program helped propel Longmont’s village. Mulshine described how hugely transformational the program had been to vets he’s met - how one gentleman finally got the cane he’d needed, how a Coast Guard vet, who had been dishonorably discharged because of the trauma she’d suffered from being raped while serving, was able to finally get the help she needed, and how a father was able to get custody of his kids.

Mulshine’s company is donating three acres of land and the necessary infrastructure south of Rogers Road and west of Hover for the 25 tiny homes that will be Longmont’s Veterans Village. While the project in Longmont is under VCP’s umbrella, the cost of the village and services need to be supported on their own. Running the project will cost seven figures per year. One cost for instance, is the salary of caseworkers who will work with a low number of veterans to ensure each person gets the most thorough level of attention.

Solomon said, “As far I know, we are the only tiny house community within city limits anywhere in the United States that’s code-compliant.” That means the houses are permanent fully-functional structures on slab foundations, hooked up to all utilities. Each house is 240 square feet; designed specifically to give vets a sense of control (beds placed to face the entire room for instance). Dogs, cats, and children are welcome.

Outreach efforts entail locating vets in need. It can take an extended number of visits on the streets and under bridges to build trust with each person, to demonstrate their lives are worth the effort, and to convince them to join the program.

Solomon stressed that housing is only one part of what VCP does. The emphasis is on “wrap-around services” which, without red tape and delays, gets vets what they need pronto. That’s because one of the distinctions that makes VCP different from other veterans support endeavors is that it’s paid for with only private funds.

Aside from the expediency with which VCP can jump in to help, they can decide in what way to help, and will not discriminate as other programs do.

“We’re able to help, which is different than a lot of government programs, because if you had a dishonorable discharge for example, that’s an automatic door slammed in your face.” Solomon said. “Our definition of a veteran is anyone who ever took the oath to serve.”

Solomon described an army sniper, who after being deployed four times, was discharged for drug use. While his discharge was understandable, his drug use was a way of self-medicating for post-traumatic stress disorder. But it meant he was not eligible for Veterans Administration benefits. VCP was able to help him.

Solomon comes in from Kansas City to Longmont every week to work on the project. He’s thankful for the many Longmont area resources available, making it easy for VCP to determine eligibility and then direct vets to these partners. “We can help clear the road,” Solomon said, “and we don’t need to reinvent the wheel; we just need to supplement what others are doing.”

The most immediate need for Longmont’s Veterans Village is funding. They are looking for small contributions, even $10 per month, and larger donations of $25,000 which would build a tiny home and house a veteran for a year.

“What an amazing community in terms of people stepping up and being willing to help, I cannot understate that,” Solomon said of Longmont. Getting Kansas City up and running took four years. Longmont will be the first expansion city for the organization and, because of how cooperative the community and city have been, they’re projecting the timeline will be closer to 18 months.

“We’re really moving quickly with the city and they’ve been incredibly helpful in terms of pushing forward with the project making sure we’re meeting all of the requirements as soon as possible,” Solomon said.

Any ideas to raise money are greatly appreciated. Kansas City’s village was the recipient of funds raised by a biker group’s progressive poker tournament ($30,000), a church collected nearly $40,000 by making VCP their congregation’s Easter cause, and children have requested donations for VCP rather than birthday gifts.

Further along in the project, VCP will need volunteers in various capacities, including in the outreach center. For every 10 people living in the village, another 10 will be utilizing services available through VCP’s outreach centers.

Solomon said VCP is hopeful to break ground in late fall and, early in 2020, to start to build homes. Projects are in the works for Nashville, Orlando and St. Louis.