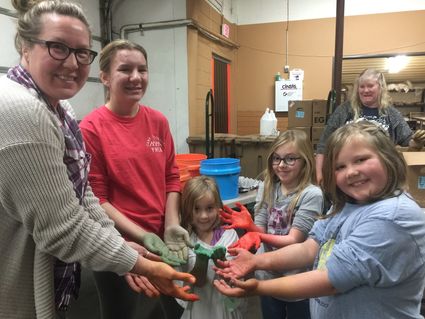 Marsha Slepicka and a crew from the local 4H club are in charge of dying up to 2,000 eggs for the annual hunt

When local realtor Pat Murphy started hosting the annual Niwot Easter Egg Hunt, she wanted to give something back to the community that had supported her growing business in its formative years. Now, after four decades of watching both Niwot and the event flourish, she also feels grateful for the opportunity to create cherished memories for multiple generations of area families.

“I am blessed that I’ve be able to work in this town all this time, and as a thank you for everybody’s business and their referrals I wanted to make it a community event that kids remember,” Murphy said of the annual Hunt, which is now in its 40th year. “Now, people that did it as kids are now bringing their kids back, and they’ll say, ‘I got a golden egg one year’—and that makes me feel good. It’s a good memory for them, and that’s part of what makes Niwot special.”

Murphy and her crew are gearing up for this year’s hunt, which will be held “come rain, snow or sun” on Saturday, April 20 at Niwot High School. The fun kicks off at 7:30 a.m. with a pancake breakfast, featuring Bert Steele of Niwot Market on the grill. A petting zoo will be open starting at 8:30 a.m., and entertainers Sami Ann the Clown and Eddie Spaghetti will also be on hand.

The main event is slated for 10 a.m., and Murphy said children of all ages will find plenty to fill their baskets, including authentic hard boiled eggs.

“The good thing is it has different age groups—the two-year-olds aren’t fighting against the fifth-graders. So we separate them into age groups so that most everybody can find something. It’s pretty organized and it’s not chaotic.”

That’s not always the case behind the scenes. In fact, Murphy said, “there’s always something,” to challenge organizers in the run up to the yearly event, from conflicts with Niwot High activities, to equipment malfunctions, but they somehow always manage to pull it off. Still, the process of boiling and dying 2,000 eggs is often “stressful” and has generated a fair share of comic misadventures over the years.

“One year we couldn’t go to the school to cook, so we had to boil them ourselves at the Fire Station, and that was hysterical,” she recalled. “Don Reeb made these wire baskets to put them in and we were out by the fire station cooking in these big pots. I couldn’t believe we were doing it, but there we were, boiling the eggs.”

Ironically, Colorado’s notoriously antagonistic springtime weather has not been one of Murphy’s main challenges.

“We’ve only cancelled one time and that was couple of years ago,” she said. “We’ve had it in the snow—they love it in the snow—but there was one time it was way too much.”

Indeed, it’s the more seasonal conditions that are often problematic.

“When it’s hot the chocolate melts, so it’s always interesting, but it comes across okay.”

For that, Murphy was quick to credit “the best volunteers ever,” including Julie Bailey at Niwot High, where the eggs are cooked each year. Murphy was also grateful for the help and support of her family, especially husband Larry, who recently retired from hauling the “huge, heavy” pancake grill back and forth from the high school. 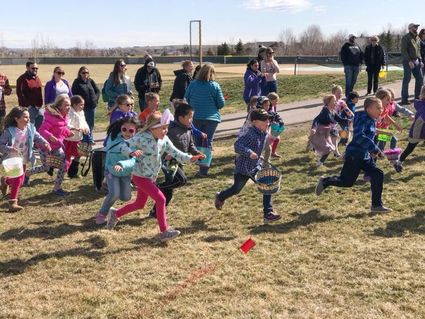 “I’ve been blessed, because you need other people to help put on an event, and because I have such dedicated volunteers that I can count on, this event can go on,” she said. “There’s the Girl Scouts and Jeanette Walters and Eve Lempiere and Julie Breyer; the Slepicka family and 4H have been the egg dyers; Chris Klatt and Ralph and Surinder Dahiya and all the other helpers for the pancake breakfast are just Johnny-on-the-spot. I couldn’t do it by myself. We stress a little bit but everybody has been so great over the years.”

The Niwot Easter Egg Hunt is free and open to the public. Tip jar proceeds from the pancake breakfast will benefit the Niwot Patriotic Cookie Moms, who prepare and ship care packages to military personnel stationed overseas. For additional information about this event, contact Pat Murphy at 303-589-2025.