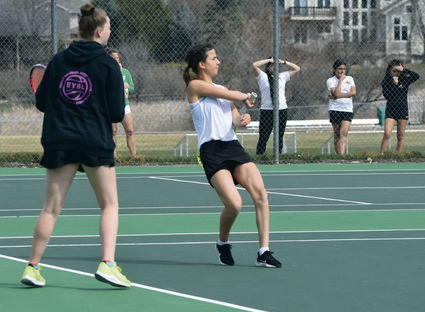 If the first half of the 2019 season is any indication, the undefeated Niwot girls tennis team will once again be a strong contender for the Class 4A state championship. But with some marquis challengers on the schedule heading into next month’s regional tournament, head coach Aimee Keronen knows her team will need to stay focused.

“We’re right where we want to be right now,” she said after the Cougars’ shutout win over Greeley Central on April 4. “I think Cherry Creek will be a tough test next week, but the girls are all playing well and the doubles teams are gelling.”

Niwot heads into its match against the Class 5A powerhouse Bruins on April 10 with 15 straight wins in regular season matches, and counts other 5A standouts Valor Christian and Fairview among its vanquished opponents so far this year. Both Keronen and senior Rachel Drake said taking on teams from larger schools is always a good test for the Cougars.

“They’re always good matches—fun to play and fun to watch,” the fourth-year varsity starter said following her straight sets victory over the Wildcats' Stacy Soto. “We really get to see how we’ll play further on in the season.”

Drake is 6-1 on the year at No. 3 singles, and, like her coach, is optimistic about the Cougars’ chances for another deep run in the postseason. 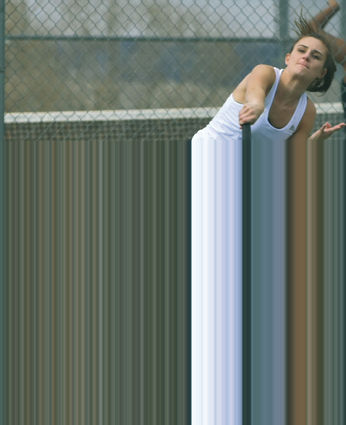 Senior Rachel Drake serves to her Greeley Central opponent during their match on April 4.

Also on track to defend her title is sophomore Lucy Lu at No. 1 singles. She improved to 7-0 on the season ahead of the match against Cherry Creek, and continues to impress Keronen with her poise.

On the doubles side, spring break and travel schedules have caused some upheaval in the pairings, but the wins keep on coming. Juniors Madee Trank-Greene and Catherine Xiao were both 6-1 in the early weeks of the season, including a straight sets victory against Greeley Central at No. 1 doubles. Junior Lily Sieben also went 6-1 to start the year, while freshman Georgia Lang was 7-0.

Following Cherry Creek, the Cougars head to Broomfield on April 15, then close out season with three Northern conference matches. Niwot hosts the Class 4A Region 5 tournament at the Quail Tennis Courts on May 3-4.