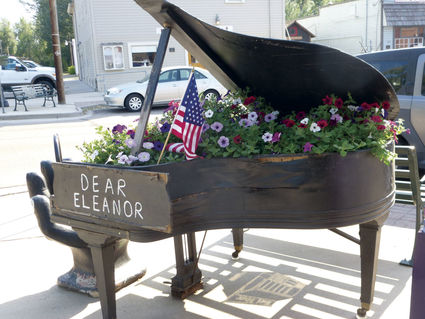 Photo by Mary Lopert Container flowers will once again be a feature of Niwot’s streetscapes in the upcoming summer months.

The Niwot LID advisory board got a preview of the warm-weather months ahead at their monthly meeting on Tuesday, April 2.

Treasurer Bruce Rabeler was first up with his budget report through the end of March 2019. To date, the LID has approved $38,401.11 in funding requests, or about 30 percent of its annual $132,854 budget. With nearly $30,000 in pending requests for April, total expenditures for the year are set to exceed 50 percent of the budget with eight months still to go in 2019.

Rabeler then recapped the 2018 revenue report, which showed very flat growth (.06 percent) from 2017, primarily due to a changing business landscape along 2nd Avenue.

Kathy Koehler of the Niwot Community Association had the first of those aforementioned funding requests. She and the NCA asked for $1,670 to help pay for the upcoming 4th of July celebration, which will once again feature a parade and bike decorating contest. The request was about 12 percent higher than last year, due to an increase in advertising costs. It was approved by a unanimous vote.

Chuck Klueber of the Niwot Business Association’s Streetscapes committee was up next with two requests, the first for $3,665 to fund weekly mowing and other landscaping services in the Community Corner area, as well as cleaning, repair and maintenance of the artwork in the Sculpture Park. All work will be performed by Outdoor Craftsmen.

Sculpture Park at Community Corner opened last fall, and there are currently nine works on display in the public art park, two of which are owned by the town, with the others on loan. Later this year, the NBA and Niwot Cultural Arts Association plans to issue another “Call to Artists” seeking additional pieces for the space. The this request was also approved unanimously.

Klueber then presented the NBA’s request for $24,500 to fund the the care and maintenance of flower containers along 2nd Avenue and in Cottonwood Square during the summer months, another double-digit increase from the prior year’s request. In 2018, the NBA requested $21,500, up from $18,000 in 2017. Like last year, most of the increase will go towards boosting the volume of both containers and blooms throughout Cottonwood Square, which has lagged 2nd Avenue in recent years.

During discussion, all LID members expressed appreciation for the town’s vibrant display, but were also leery about the ever-growing price tag.

“This is one of those items, like the holiday lighting, that we seem to have an appetite for that we don’t seem to be able to help ourselves,” Chair Laura Skaggs said. “We need to start helping ourselves...Given the position we’re in with the budget, I don’t like this amount of increase. It just keeps coming and coming, and I don’t think it’s sustainable for us unless something major changes in our revenue stream.”

After further discussion, the board unanimously approved an expenditure of $21,500 for the flowers, the same amount as in 2018.

Moving onto New Business, the committee decided to delay a parking study in Old Town Niwot this year, as most members felt it would probably not show a substantial increase in utilization, thanks to recent business closures along 2nd Avenue. Instead, the committee is hoping efforts to revisit utilization thresholds and Niwot’s future public parking lot alluded to by Commissioner Deb Gardner at the Board of County Commissioners’ public hearing on March 12 will bear fruit faster.

With no Old Business or public comment, the meeting was adjourned. The committee will meet next at 7 p.m. on May 1 at the Mountain View Fire Station.