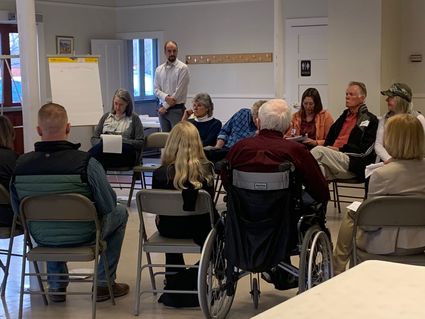 Residents of 3rd Avenue and 2nd Avenue business and property owners met with Boulder County officials on April 3 to discuss upcoming changes to alley use in the land use code.

Nearly 20 interested stakeholders came together at the Left Hand Grange on Wednesday, April 3 to continue the discussion with Boulder County officials about how upcoming changes to the NRCD land use code will impact the 600-foot long alley separating the rear properties of 2nd and 3rd Avenues east of Franklin Street in Niwot.

A mix of residents and property owners participated in the sometimes-heated roundtable with land use director Dale Case and county transportation engineer Mike Thomas, who provided an overview of the administrative and logistical hurdles that have to be cleared before much-needed improvements can move forward.

“Concerns have been raised about how the alley will function, about how much traffic, and about design and so forth,” Case said in his opening remarks. “So the idea is to get further down the road on what that process might look like and what the community wants to see. We’re starting the discussion tonight to go over some of the concerns that we know are going to be there.”

Use of the alley has been one of the focal points of debate during the NRCD code update process, which was initiated by the county last fall and included a six-month moratorium on new development applications in downtown Niwot. The alley is owned by the county and is “a public right-of-way,” with access granted to property owners on both sides.

In recent years, vehicle traffic has dwindled to a minimum in the narrow dirt “driveway,” largely due to recommendations in the county’s 1996 Alley Study that called for NRCD businesses to open their rear-lot parking via ingress points along 2nd Avenue, which reads in part:

“Where physically possible, Second Avenue or another primary road, should be used to access a property instead of an alley. The roads are better designed to handle traffic flow and are maintained by Boulder County.”

More than two decades later, however, updated considerations about vehicular traffic on 2nd Avenue have led county planners to seek  a formal reversal of that guideline. Proposed revisions to the NRCD land use code now call for elimination of those access points, known more commonly as “curb cuts,” in a move to “separate vehicles from the pedestrians.”

“The more we can do that, the more walkable a community you make,” Case said, after calling part of their motivation behind the update “an urban design.”

Later this month, the Board of County Commissioners will hold a second public hearing to consider this and other pending updates to the code, although at least one member made her support of increased alley access clear in the March 12 proceeding, and directed land use staff to start moving the process forward.

“It makes sense to use the alley and I’m so sorry for the good neighbors who have lived on 3rd Avenue enjoying not having that alley be used, but it really makes sense from a land use planning standpoint to use the alley,” Commissioner Elise Jones said during deliberations of the first public hearing.

The board ultimately decided to table its decision on the code updates until another public hearing on April 23. “I think the trade-off is for us to mitigate that landscape, setback, and fencing so the impact is as minimal as it can be. “

But even with the backing of the BOCC, expanded use of the alley isn’t quite a fait accompli. Significant questions regarding the timing, cost and scope of ultimate improvements will have to be settled before much work can proceed.

According to Case and Thomas, there are three major steps in the improvement process, starting with a comprehensive traffic study of the streets in question, followed by design, and finally construction, each of which presents its own “constraints and opportunities.”

For example, there was broad agreement about the need for a traffic study to help dispel some lingering doubts on both sides of the debate.

“Are we planning for 20 or 200 trips per day?” asked 3rd Avenue resident Satir DeMarco, echoing a concern that an influx of residential development to the block could mean hundreds of additional car trips per day down the alley. However, property owners could also opt to keep curb cuts intact, minimizing potential changes. “It’s evolving, and I think the traffic study is critical, based on the worst case scenario and what could be allowed.”

Such an evaluation could also help shed light on potential safety risks to pedestrians on 2nd Avenue, especially at the aforementioned curb cuts—an increasingly urgent concern, according to property owners. However, some neighborhood residents have rejected these worries as “anecdotal,” and lacking any formal evidence.

Unfortunately, a formal study examining several variables is potentially costly, and Thomas said the county would look to the developers and property owners to pick up the tab.

“Certainly, we’ve heard from residents that feel that this is something the business owners want to do, and right, wrong, or indifferent, [the residents] feel that if there is going to be work done that they don’t want, why should they pay for it?”

Similar costs and payment issues also loom over the design and construction phases, as do questions about who will participate and how the process can move forward quickly. Even basic questions about whether the alley can accommodate two-way traffic or will be paved have yet to be settled.

The only problem is that those “standards” don’t formally exist. Boulder County doesn’t impose much regulation of alleys, which makes estimating and planning difficult on  both sides.

“If you were just talking about going in there and regrading the alley and adding some road base, then you could probably get it done for $1,500,” Tim Coonce, co-owner of Porchfront Homes, said in response to a question about potential construction costs. “But we don’t have standards, so we don’t know what the drainage needs to look like….There needs to be some engineering and  surveying done in addition to that.”

Thomas contended that much of the design work will have to wait for the traffic study, and put forth a timeline that has construction underway sometime during the fall. This was met with some pushback from Anne Postle, who expressed frustration with the county’s failure to address concerns about the alley earlier in the code update process, a point many homeowners agreed with.

“We wondered why this didn't start at the beginning of the moratorium,” she said, responding to Thomas’ saying that he doesn’t want to “rush” the alley improvements.  “We’re seven months into it now, and now you’re just talking about starting the study. You’re just extending the moratorium pretty extensively.”

Discussions continued from there centered on largely the same competing themes—concerns about moving traffic to the alley and how to keep the project moving forward. At one point, Pat Murphy, a longtime area resident and owner of Niwot Real Estate, called on everyone to find common ground “for the greater good of Niwot.”

“All we want is a tasteful area….If it looks like Boulder or Denver, people won’t come here,” she said.

The meeting ended on a mostly collegial note, with more participants seemingly resolved to waiting out yet one more process. Land use staff member Denise Grimm, on hand to field questions along with Case and Thomas and other staffers, said the county would reach out with further engagement efforts as the design process gets underway.

Thomas said he hopes to have the traffic study completed in the next two to three months, with an eye toward completing design in the summer. The next step in the process, of course, is the upcoming BOCC hearing on Tuesday, April 23, at 3 p.m., where they are expected to consider the staff recommendation on updates to the NRCD land use code.

For additional information and to make public comments, visit https://www.bouldercounty.org/property-and-land/land-use/planning/land-use-code-update/dc-18-0004/