Boys volleyball gets an audition at Niwot 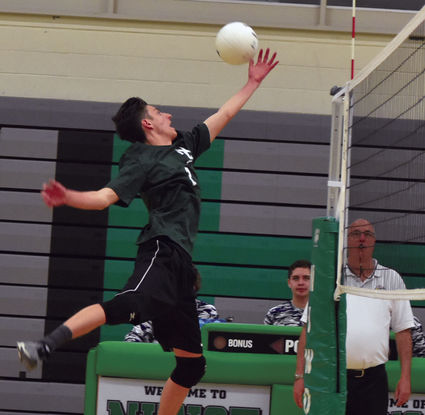 Boys volleyball gets an audition at Niwot

Boys volleyball is one of the fastest growing high school sports in America, and this spring it could be among the first new team sports to be sanctioned by the Colorado High School Activities Association (CHSAA) since 1999.

On April 24, members of CHSAA’s Legislative Council will vote on whether to add boys volleyball, girls wrestling, and unified bowling to the list of “official” Colorado high school sports, which has been static since field hockey was sanctioned 20 years ago.

So far, boys volleyball has cleared reviews by a number of CHSAA subcommittees, including Classification and League Organizing (CLOC), and Equity, which determines the Title IX-mandated balance between boys and girls participation, and is a hurdle that tripped up the sport in its previous sanctioning attempt three years ago.

In March, nearly 80 teams from across the state kicked off an eight-week pilot season for boys volleyball, one of the final steps in the sanctioning process. Approximately 45 smaller schools compete in the 3A classification, with larger schools in 5A. There are eight teams from six schools in the St. Vrain Valley district, including two each at Skyline and Erie.

Among the others is the Niwot Green, which has 17 “enthusiastic” but inexperienced members and is headed up by veteran coach Tricia Grafelman of the girls C-team volleyball. The Cougars have been competing in the 3A North league since mid-March, and while there haven’t been a lot of wins yet, there has been a lot of learning and a lot of fun, according to Grafelman.

“What’s great about boys is they learn quickly,” she said. “They’re so eager to learn that they just pick it up. It’s super fun to coach because they listen and adjust. I laugh every single practice. They just have a way of not taking it too seriously, partly because they are a little bit unsure of what they’re doing.”

The team is slowly getting up to speed, after a rough start to the season. Niwot lost the first four matches, but rebounded to go 3-1 in the week before spring break. Grafelman is confident that even more wins are coming, now that the novice players are starting to get a feel for the more nuanced aspects of the game.

“The skills came quicker than actually running an offense or defense,” said Grafelman, who was encouraged to accept the head coaching position by her daughter Leslie, a member of Niwot’s varsity girls volleyball team. “That’s been a real trick. They just don’t have a conceptual feel of where they should be.”

Grafelman’s comments were echoed by senior and middle-hitter Dom Luthens, one of the earliest and most ardent proponents of the pilot program at Niwot, and now the team’s captain. He is also their season leader in kills, with 24. Luthens has managed the girls volleyball team for several years, and has been eager to get out on the court himself. However, it’s not quite as easy as the Niwot girls have made it look over the past several seasons, he admitted.

“Adjusting blocks is a lot different than I thought it would be. I’m usually up way over the net, but it’s hard to push over and sometimes you take it to the face.” 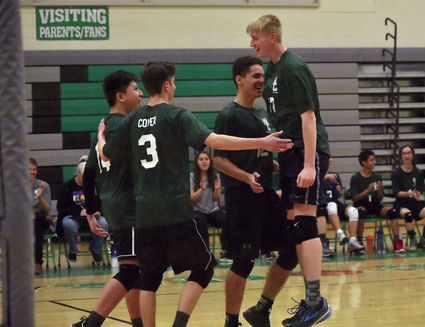 Senior Dom Luthens and his Niwot teammates celebrate after scoring a point against Frederick during their match on March 21.

Grafelman is hopeful that boys volleyball will get the official nod from CHSAA and become a permanent part of the Colorado high school landscape. If sanctioned, the three sports will launch their inaugural seasons in the 2020-21 school year, with boys volleyball slated for the spring calendar. If the program continues at Niwot, Grafelman hopes to stay on and see opportunities for boys to play the sport continue to grow.

“I want volleyball to be a lifetime sport not just for girls but for boys as well….One of the things I love about volleyball is that you can look at a set of players that’s really short and think “they’re not going to be any good,” and then they’ll literally serve 22 aces to you. You cannot judge a book by its cover. It’s an equal playing field when you get out on the volleyball court, and it’s great to see these boys getting excited about it.”