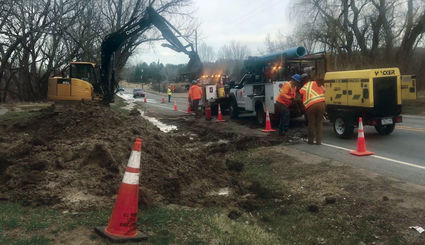 The Left Hand Water distribution crew worked to uncover the broken water line on Niwot Road and directed traffic while one lane was closed down to allow room for equipment needed to do the job.

Just after 5 p.m., when residents tend to be returning home from work and school, the flow of traffic was narrowed down to the eastbound lane on Niwot Road for less than a block to allow Left Hand Water District trucks and equipment to repair the break on the north side of the road.

The mishap occurred in a wide section of grass between the sidewalk and the road east of Meadowdale Drive on Niwot Road. It was the best place for this type of thing to happen, according to workers on the scene, because there was no damage to either the street or the sidewalk surfaces, and it occurred on a public right of way rather than on private property.

Xcel Energy has been replacing underground electrical cables on James Court that connect with Meadowdale Drive and Niwot Road. Although Left Hand Water District workers placed blue water pipe locator flags in the area in advance of the project, the flags don’t indicate how deep the pipe is buried.

Protocol is to have each flag within 18 inches of either side of a water line’s horizontal location. It’s then common practice for crews to use hydro excavating equipment to bore underground to more precisely find each line. This procedure allows workers to avoid existing pipes while performing other work in the area. During this process, the boring equipment accidentally burst the side of the water pipe.

As part of the procedure to fix the pipe, six water valves needed to be closed to slow and to eventually cease the flow of the water to the broken pipeline. This caused some residential and business customers to be without water for a short period of time.

Left Hand Water used excavating equipment to dig around the pipe to make room for their pumps to clear water from the area. The water flow was directed east on Niwot Road until workers were able to access the break in the line and make the repair.

While Left Hand Water workers initially anticipated having to cut out a section of the line and replace it with new pipe, the fix was completed by using a repair band to patch the pipe, making the job easier. It took the Left Hand Water crew until 9 p.m. that night to resolve the situation.

Workers on the scene from the subcontracting company stayed during the excavation and repair and were back the following morning to clean away sediment debris. They will reseed the area with grass. 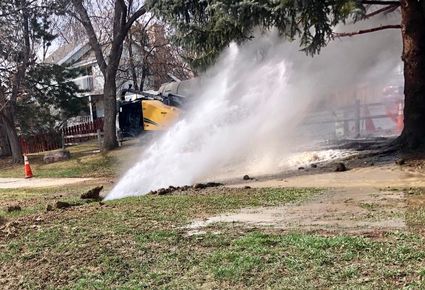 Water gushed out of a broken pipeline on Niwot Road, March 27.

Left Hand Water Distribution Manager Adam Delaney reported that a quarter million gallons of water was lost as a result of the accident.

Delaney said, “I’ve worked for private and public companies, and this just happens. They (the subcontractors) have been here helping us out and mitigating the water. They’ve been great and responsive.”

“No matter whose fault it is, anytime this happens, everyone has a bad day,” a field worker for the subcontracting company said. “We don’t like damages and that’s why we make so many holes in the ground constantly trying to find all of these utilities. This happens once in a blue moon.”