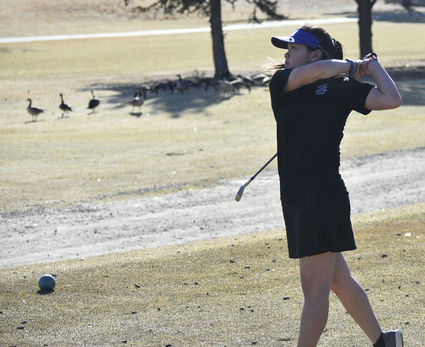 Sophomore Halie Ostrom tees off on the 18th hole at Loveland’s Olde Course on March 20.

After nearly two weeks of bad weather and snowy course conditions, the Niwot girls golf team finally made its 2019 debut on March 20 in Northern League Event #1 at the Olde Course.

If the lengthy delay had any effect on Niwot golfers, it wasn’t evident in their play or their scores. In fact, it may even have been an advantage, as three Cougars set brand new career-best marks on the day, as Niwot cruised to the team title by 36 strokes.

One of those new PRs was for junior Julia Solem, who carded an 81 to capture the individual title, her first in a league event.

“I’m glad to finally be out here on this beautiful day,” Solem said after her record-breaking round. “I wasn’t thrilled with how I was hitting the ball, but I chipped and putted very nicely, and that saved me.” 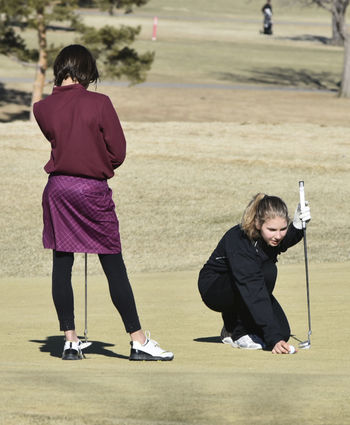 Freshman Sydney Rothstein lines up to putt on the 13th hole at Loveland’s Olde Course.

Just three strokes behind her in second place was sophomore Halie Ostrom, with an 84 and another PR. She was followed by Laure Bourgin in 8th and Macy Gruszczynski in 18th, with another personal best.

Then there was another Niwot debut on the day, that of freshman Sydney Rothstein, competing in her first ever high school tournament. She finished her round with an 87 and tied for fifth overall. Though it wasn’t a new record, it did help the overachiever get a head start on her goal of breaking 90 by the end of the season.

Niwot head coach Ed Weaver was “so proud” of the team afterwards, but knows there’s still a lot of golf left to be played.

“I’m pretty happy, if only from the standpoint that we haven’t had great practices due to the weather.” he said after the match. “But the girls were really pulled together and they played well.”