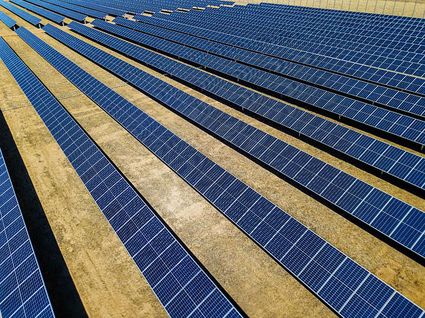 In November 2017, the Courier reported IBM's Gunbarrel facility would be building Boulder's largest field of photovoltaic panels. Initially projected to be completed by November 2018, the endeavor underwent a few changes and broke ground this month.

Brody Wilson, manager of Global Energy and Environment for IBM, said the change in venue was due to the fact that the preferred layout worked better on the east side of the campus and offered less shade than the original site.

Since last reported on, IBM won a second release of Xcel Energy's Solar Rewards Program, adding four additional megawatts (MW) to the project. The result will be a total of nearly 10 MW of direct current electricity for IBM's facility. That translates into a field of 25,000 solar panels.

Locally-owned and operated Namasté Solar is the designer, as well as the construction company on the project. Power is slated to be operational sometime between the end of July and early August.

Wilson said part of the venture's postponement was owing to paperwork – primarily the process of securing contracts and permitting.

"Also, we decided to expand the project," Wilson said. "When we had the opportunity to expand to 10 megawatts, that became the biggest cause of the delay."

Part of the plan has always been to allow sheep to graze under and around the panels, and according to Wilson, IBM is still working on finding an appropriate local grazer.

Xcel's Solar Rewards Program is an integral part of its overall Colorado Energy Plan which states, "The Colorado Energy Plan is Xcel Energy's roadmap to develop a significantly cleaner energy mix and reduce carbon emissions in Colorado." The company's update from fall 2018 reads, "When complete, we will achieve nearly 55 percent renewable energy on our power grid by 2026, and reduce carbon emissions by about 60 percent from 2005 levels-all while keeping customer bills low."

The solar array on its Boulder County campus will also serve IBM's stated environmental goals to "procure electricity from renewable sources for 20 percent of IBM's annual electricity consumption by 2020."

"I can't tell you how excited we are that it's finally getting built," Wilson said. "It's been almost three years in the making and everybody at IBM is really proud of the environmental impact it will have."