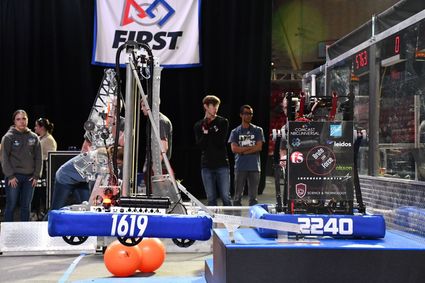 A key part of this year's challenge is the ability of the robot return to its elevated platform before time expires.

Nothing energizes a project team like a last-minute and potentially catastrophic failure. So when a routine maneuver to reset their robot's climber somehow went wrong during the final round of the FIRST Robotics Colorado Regional, both students and mentors from Longmont's Up-A-Creek Robotics crew flew into action.

"It was super-stressful," Niwot senior and team software lead Nevin Gilbert said of the rush to repair a snapped release lever before the decisive match. "We really thought we had it in the bag there, and we were ready to wrap it up, and then that was super unexpected. But I think that's something super awesome about the program-it teaches you a lot of real-life skills in the sense that you have all these unexpected things that you never see coming, and how do you handle that."

According to Gilbert, the eventual repair was anything but elegant, thanks to another real-life lesson in making do with the materials at hand. But it did what it needed to do, and Up-A-Creek Robotics (also known as Team 1619) went on to lead their three-team alliance to victory and claim the 2019 Colorado regional championship.

"I was just so excited," Gilbert said. "We put so much effort into Colorado last year, and we came super close, competing with some of the greatest teams, and I was just looking forward to winning Colorado this year, so it was an awesome feeling."

Up-A-Creek and 52 other teams vied for the title during a two-day tournament at DU's Magness Arena, on March 22-23. A large majority of the teams were from the host state, but there were also representatives from Arizona, South Dakota, Wyoming, Oklahoma, Texas, and Mexico in the field. During the finals, UAC partnered with The Kraken, a team from George Washington High School, and Bearbotics, from Palmer Ridge, to form the winning alliance.

Nor did Up-A-Creek lack for friendly competitors, with several local rivals in the mix, including Dawson School, Casa de la Esperanza Robotics, composed of Hispanic St. Vrain students; and Innov8, a first-year team from the St. Vrain Innovation Center, headed by Axel Reitzig, the district's director of robotics and computer science. They were recognized as the Highest Seeded Rookie team and later received the FIRST Robotics Rookie All-Star Award.

With the win, Up-A-Creek clinched its second regional title of the year. Back on March 9, the team took the top spot in Oklahoma City and earned a return trip to the FIRST Robotics National Championship in Houston, coming up on April 20. In 2018, Up-A-Creek finished third overall in prestigious nationwide event, and many team members believe 1619 is on a similar trajectory this season.

"It's great that we won, but we have to keep looking forward," Silver Creek junior Teegan Oatley said following the win. "We still have a lot of work to do, but I think we're going to be super ready for champs."

Provided, of course, that they find a permanent fix for the broken release lever. Without that part, Team 1619's robot won't be able to return to the third level of its habitat, a key mission in this year's competitive challenge, DESTINATION: DEEP SPACE.

As described by FIRST, the 2019 mission "finds teams collecting samples on Planet Primus....With only two minutes and thirty seconds until liftoff, the alliances must gather as many cargo pods as possible and prepare their spaceships for departure before the next sandstorm arrives."

FIRST released mission details in January, and gave teams until Feb.19 to design, fabricate, and build a machine capable of both gathering balls and attaching flat, circular panels to the exterior portholes, then climbing to the top of its raised habitat. In competitive matches, the teams race to gather and load the most "cargo" and place the most hatch panels before returning to their home platforms before time runs out.

According to Niwot junior Chris Yan, in his second year with the team, at least two elements of the 2019 mission weren't as straightforward as it seemed at first.

"Two of the main challenges were the climbing, because the platform was so hard to grab on to, and you either have to move your whole robot onto the platform or find a clever way to hold yourself up, and the hatch panel," he said. "The hatch panel is a new game element that has never been used in competition before; it's usually either a ball or a cube, so this year we really had to spend a long time figuring out how we were going to get the hatch panel to be very efficient and basically place them anywhere we want."

2019 has been another breakout season for Up-A-Creek Robotics, which was formed in 2004 and initially operated out of a classroom at Silver Creek High School. In the 15 years since, the Team 1619 has grown to nearly 90 students from nine St. Vrain Valley secondary schools, and has become one of the most successful teams in the state, an act it hopes to duplicate on the national stage next month.

However, for Gilbert, the emergence of Team 1619 as a FIRST Robotics powerhouse has been about more than team titles and win-loss records.

"It's a good opportunity to make a positive impact on the community," Gilbert said. "Up-A-Creek has a lot of community outreach opportunities. Over the summer, we host a bunch of different summer camps for younger kids-programming camps, design camps where they can get their hands dirty with SolidWorks and 3D modeling. We even have a MineCraft Camp." Up-A-Creek is also home to several FIRST junior lego leagues and other youth robotics teams, that are largely mentored by the high school students.

Up-A-Creek also has a reputation in the robotics community for being generous with its time and expertise, not just among teammates, but also other competitors. For these efforts, the team was also awarded the Johnson & Johnson Gracious Professionalism Award, which recognizes the team that "encourages high-quality work, emphasizes the value of others, and respects individuals and the community."

For Oatley, that spirit of "coopertition," has in turn helped create an overarching community that is collaborative and supportive. 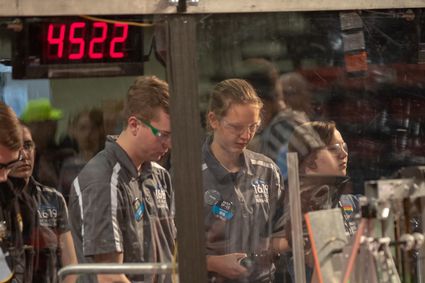 "The finals match was a great example of that," she said. "Seeing teams that we've competed against down there cheering for us, it's a really good feeling. When we won, we went over and shook hands with the opposing alliance, and it's that kind of community spirit that makes you feel good; it's those connections that you build."

Between now and their trip to Nationals, Up-A-Creek members are barred from making too many modifications to their robot, but they will be looking to make some minor tweaks and repairs to improve efficiency. They also may add some automated processes to their unit for navigating the opening sandstorm period.

"I'm always looking for places where we can improve, but after being seeded first at Colorado and Oklahoma, you can't lose sight of all the things you're still capable of," Gilbert said. "I'm pretty proud of the robot that we've built this year. We'll just have to see."