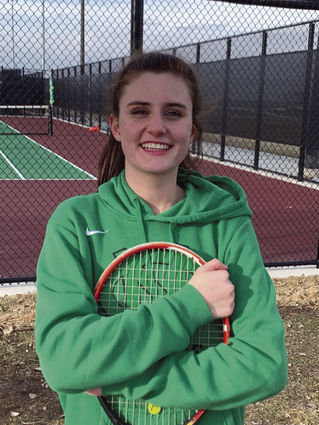 Senior Rachel Drake will help lead the charge for Niwot as they prepare to defend their 2018 Class 4A state tennis championship.

Niwot head coach Aimee Keronen knows that it won’t be easy to defend the Class 4A state tennis title, but with eight returning starters plus a handful of talented newcomers, she knows it’s not exactly a longshot, either.

“We’re still in a good position,” she said about the upcoming 2019 season. “We definitely have some holes we need to fill, but the girls are using it for motivation. They got that taste of winning and want it back.”

Winning is just about all the Cougars did last season. Led by nationally-ranked Lucy Lu at No. 1 singles, the Cougars went 11-1 on the season and then stormed through the Class 4A state tournament, ultimately dethroning nine-time defending champion Cheyenne Mountain to capture their first team title in a decade. Along the way, Lu and seven other Niwot players also picked up individual state titles.

Just a sophomore, Lu is back at the helm for Niwot again this season, and, thanks to a year-round competition schedule, “hasn’t missed a beat,” according to Keronen.

“I consider her the player to beat again at state,” the coach said. “I think most likely it will come down to her and Josie Schaffer from Kent Denver. In fact, I predict right now that will be the final.”

Returning to the varsity roster but in a new role is junior Tehnley White at No. 2 singles. Last season, she was one-half of the top doubles pair, and finished fourth overall at state. White is new to singles this season, but Keronen said her “mental toughness” makes up for a lack of solo experience.

“She doesn’t really get super frustrated or upset with herself. She doesn’t fold under pressure, and you never count her out in a point. I think she’s going to fit in that spot really well. She’s going to have some tight matches, but I think she can handle it.”

Also in a new role is lone senior Rachel Drake, the other half of last year’s No.1 doubles pair. She’s back in the lineup at No. 3 singles, where she played as a freshman and sophomore.

“I think she’s comfortable and likes being in that position,” Keronen said. “She’s that much older and that much more mature, and I’m expecting a good season out of her.”

The coach said she is still fine-tuning the doubles pairs, but likes what she sees so far out of the new top pair of Emily Creek and Catherine Xiao, who played at No. 4 and No. 3 doubles respectively last year. Keronen said the two complement each other well and she is excited to see their progress over the season.

Keronen is also excited about freshmen Anna Sallee and Georgia Lang, the latter of whom is the younger sister of former Niwot tennis standouts Spencer and Harrison Lang. Keronen said the ninth graders are both “super-competitive,” but also a little “weird.”

“They’re weird in the sense that they’re freshman, but you’d never guess that they’re freshmen. They don’t seem nervous and they just go out there and get the job done. Normally, I wouldn’t put two freshman together, but maturity-wise, they’re solid.”

Also returning to the team are veterans Lily Sieben and Maedee Trank-Greene at No. 2 doubles, and Annie Heinritz at No. 4 doubles. She is paired with junior Esme O’Rourke, who is new to the varsity squad this season.

Lingering winter weather has played havoc with Niwot’s schedule in the first weeks of the spring season, but the team has had success in early matches against Valor Christian (5-2) and Monarch (5-2). Northern League matches begin after spring break, but the Cougars will also get a chance to see some formidable non-conference foes in Cherry Creek and Kent Denver in April.

In the end, Keronen stopped short of guaranteeing the Cougars would win the title for a second straight year in 2019, but she makes a very convincing case that they could.

“I would not count us out,” Keronen said. “It’s going to be a lot of work, and a lot of things are going to have to fall into place, but I would say we’re definitely a team to contend with.”