Jack's Solar Garden is getting ready to energize the community 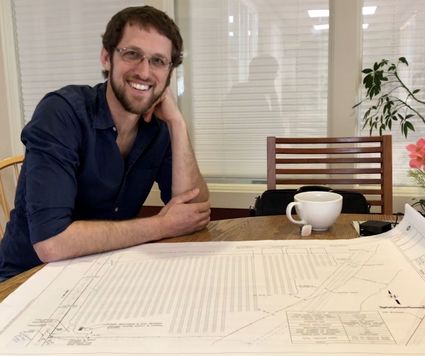 You can't miss the increasing number of nearby fields donning what seem to be modern art installations of shiny black rectangles slanted toward the sun. These masses of photovoltaic panels are solar farms and, while their orderly appearance in place of the usual disarray of plant life is what captures our attention, it's their purpose of collecting power from the sun and converting it to electricity that's truly amazing.

But you haven't seen the most awe inspiring type of solar installation yet in Boulder County. It's the marriage of both agriculture and solar structures on farmland, dubbed an agrivoltaic system. Byron Kominek intends to bring the first of its kind to our area when he builds Jack's Solar Garden on farmland at 8102 North 95th Street.

There are exciting plans for the local enterprise and the benefits for the community are huge. Aside from a variety of crops under and around the solar panels, the vision of the farm includes a pollinator habitat for beehives on-site, public art installations, collaborative research efforts, educational tours, free energy to low-income households and down the road, community supported agriculture (CSA).

Kominek's grandfather, Jack, moved to the land in 1972. The 24-acre homestead was his "retirement farm" after 30 years of farming on 120 acres in Broomfield. Jack passed away in 1980, but the land has remained in the family.

After earning his master's degree in environmental engineering, Kominek joined the Peace Corps and then became a U.S. diplomat with the U.S. Agency for International Development in Zambia and Mozambique concentrating on forestry and wildlife conservation. Following the completion of his job as a diplomate, Kominek and the dog he adopted from Africa hiked the Appalachian Trail. In 2016 Kominek settled on his family's farm.

Kominek said, "We've been doing hay farming forever and the family basically pours money into the farm trying to keep it afloat even though we're not getting any revenue back from it. So I was wondering how can we make revenue from it?" With his background in engineering, a penchant for environmental consciousness, and farming blood in his veins, Kominek felt the call to build a solar garden.

However, Boulder County regulations prohibited that. After a year of "pestering" the county, as part of the most recent agricultural land use code amendments in November 2018, the county added a new provision allowing community solar gardens, a co-location of agriculture and solar energy, on farmland.

Two weeks before the county's official approval for solar gardens, Kominek saw a rare opportunity to bring his dream to fruition, so he rolled the dice that county codes would change in his favor and paid the $750 application fee to Xcel Energy to submit a bid for their Solar Rewards Program.

Kominek learned Jack's Solar Garden had won the bid with Xcel on Dec. 1.

The community also has an opportunity to win from the project. Jack's will be adding 1.2 MW (megawatts) to Xcel's energy grid, and if you're on the Xcel Energy grid, becoming a subscriber to Jack's will benefit your electric bill through offset credits.

According to the projected timeline, beginning this fall five acres of the farm will be covered with an array of 3,000 six-foot long solar panels set in rows 17 feet apart. Each will track the sun from east to west. The energy generated from those panels can service 250 to 300 households on Xcel's grid, Kominek said.

Construction of the project is funded by the public signing on as subscribers. How much each subscriber may buy in for is a calculation of previous usage, and is then translated into a number of panels in the garden. Xcel in turn credits the subscriber's monthly energy bill in proportion to their percentage of the total energy produced on Jack's.

Kominek is planning for signups to open in April. Each subscription is tied to the person, not to their home and may be transferred to other people or organizations. Subscribers pay upfront for five, 10 or 20 years of benefits.

As megawatts are put into the system, Xcel pays the solar garden. Those funds are used for the operation and maintenance of the solar-powered system. Terms of Xcel's agreement with the solar garden dictate that the project needs to be transmitting energy by mid-2020, but Kominek's timeline is shooting for energy to start flowing by Dec. 2019.

The garden is partnering with researchers from the National Renewable Energy Labs (NREL), the University of Arizona, and Colorado State University, whose scientific teams will be instrumental in deciding where and what to plant under the panels. Research done on the farm will tell scientists how to best co-locate solar energy with agriculture, how bees do in the environment, the most efficient height of the panels, and irrigation methods.

Jordan Macknick, Lead Energy-Water-Land Analyst with NREL explained that Kominek reached out to NREL because the organization is a pioneer in the field of solar gardens.

Macknick said, "We bring a level of scientific rigor and research into this project by systematically looking at how crops and vegetation grow, as well as installing instrumentations to understand why certain plants are doing well. We have an ongoing research project and funding from the Department of Energy where we're looking at this across the nation with about 25 different field sites across the country."

The garden's first planting will be of the opaque solar panels, which allow no sunlight to come through. What's beneath them will only get direct light when the sun is at particular angles. The added beauty of the shaded conditions is a reduction in water needs.

"Colorado summers are hot and can be dry and very intense," Macknick said. "A lot of the crops love this partial shade and will actually do better. We've been able to demonstrate that you can get higher yields using less water, because the plants are not as stressed and you have less evaporation."

Kominek said, "For the first few years, the idea is to research what types of crops people eat are most likely to grow well. And then the hope is after a few years to be able to work with a CSA or to start a CSA to provide food for the community."

A philanthropic benefit to the project is that a percentage of the total grid capacity will provide free energy to select low-income recipients in the county. Subscribers also get the satisfaction of knowing that they're doing a good turn for Mother Earth and her inhabitants by reducing fossil fuel usage and helping to supply clean energy.

For those who don't have solar panels on their home, and even for those who do, Jack's Solar Garden is the perfect way to support locally produced alternative energy.