Student of the Week: Aidan Peairs

Series: Student-Athlete of the Week | Story 5 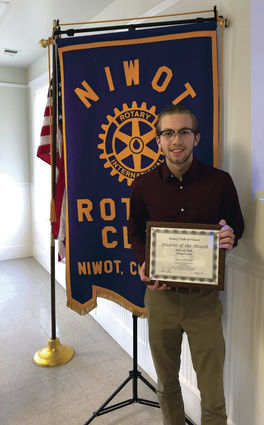 Niwot senior Aidan Peairs was recently honored at the Niwot Rotary Student of the Month.

March can be a tense time of the year for ambitious high school students waiting on college acceptance letters, but so far that hasn’t been the case for Niwot’s Aidan Peairs. The Rotary Student of the Month has already been accepted to two of the top schools for his intended major, so he isn’t exactly hurting for attractive options.

“I applied early to Harvard and got deferred, and I’m waiting for Columbia, Cornell, Brown, Tufts, NYU, Johns Hopkins and Vanderbilt,” he said. “My number one is probably Harvard or Columbia, I keep going back between the two. I’m not too stressed about it though, because CU and Georgia Tech are both really good aerospace schools, too.”

While he awaits official word on his post-graduation fate, Peairs is keeping busy both in and out of the classroom. A gifted student, he has adopted a hybrid AP/IB schedule for his senior year, and carries three of each class on his Niwot schedule, including AP biology and computer science and IB French and English.

“IB is definitely more writing focused and free-range,” he said of the competing college prep curricula. “AP is more a traditional class set-up, and the exams are part-multiple choice and part free-response….With languages I definitely like IB better, which is why I stuck with IB English and IB French. For sciences, I like AP better.”

He is also active in the Aeronautics Program at the St. Vrain Innovation Center, where he is taking a class in Unmanned Aircraft Vehicles (UAV) Engineering and Design. In that class, which Peairs said is his favorite, students get hands-on experience researching, designing and constructing experimental aircraft.

“It’s like an introduction to aerospace engineering,” he said. “The main goal right now is to create a plane that will fly and carry supplies. It’s based on a real life idea to carry medical supplies to villages in Uganda. So we have to create something like that to fulfill the design challenge and go through all the different stages.”

Peairs also spends much of his time outside of the classroom pursuing his interest in aerospace and aircraft, which he eventually hopes to turn into a career. He is a member of Niwot’s Aviation Club and the Aeronautics Club at the Innovation Center, which he described as similar to the UAV design class, but “more free-range.”

His interest in aircraft doesn’t extend much beyond models, however. Though intrigued by flying planes when he was younger, Peairs said he now thinks being a pilot involves “too much sitting.”

Peairs didn’t get a chance to do much sitting while pursuing his Eagle Scout rank, which he achieved earlier this year after earning nearly 30 badges for accomplishments in financial management, family life, outdoor pursuits, and personal fitness.

For his community service project, Peairs directed a small group in building two xeriscape gardens at the administration building for the Lefthand Water District, an endeavor that taught him as much about project management as it did caring for the environment.

“It was a good opportunity to learn how to work with different groups of people, and how to arrange people to get a job done in a timely manner.”