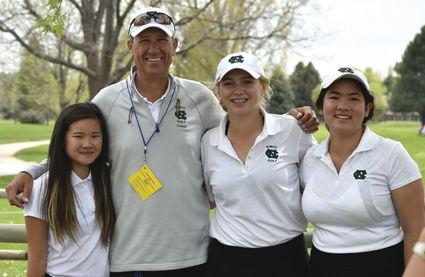 Returning to the 2019 Niwot girls golf team are Halie Ostrom (far left), Julia Solem and Laure Bourgin. Head coach Ed Weaver is in his third season with the Cougars.

The Niwot girls golf team found its way back to the Class 4A state tournament in 2018, and head coach Ed Weaver has every reason to believe that the Cougars are headed back there in 2019. With a mix of returning veterans, plus an influx of promising newcomers, Weaver said this season’s team has the depth to challenge the top teams in the league.

“My goal is to win the conference, and qualify as a team for state,” Weaver said. “I’ve got two returning qualifiers, and we’ve got good representation with a senior, junior, sophomore and a freshman in the top four. Then we have a junior and five sophomores. It’s a bigger team, but there’s some talent.”

There’s also quite of bit of experience. Returning to the varsity lineup is junior Julia Solem, now entering her third year with the team. Solem took fourth overall in last spring’s regional tournament and headed up Niwot’s three-player contingent to the two-day Class championships, which were held at the technically-challenging Country Club of Colorado in Colorado Springs.

Unfortunately, Solem struggled in her state debut, carding a 208 and finishing 49th overall. Weaver said 2019 could be a breakout year for the 11th-grader, thanks to off-season training with a new swing coach. “Her swing is completely different. It’s much, much better.”

Also returning to the varsity lineup is sophomore Halie Ostrom, another state qualifier, and another player Weaver expects to see playing for event titles. Also back is Laure Bourgin, who had almost no exposure to the sport before joining the team as a junior, but picked it up quickly and cemented a spot in the varsity early on last season. She narrowly missed the state cut at the 2018 regional tournament, but was a regular on the course during the off-season, and even competed in some high profile local tournaments. Weaver said he will look to the levelheaded senior to be the team’s leader.

Rounding out the foursome this year will be freshman Sydney Rothstein.

“She can play,” Weaver said of the newcomer. “She has a good swing, hits the ball straight, and has been working hard already.”

Other returning players include junior Trinity Pleffner, also in her third season, and sophomores Macy Gruszczynski, Isobel Tuck and Anna Taing. There also two new sophomores, Dora Pechersewski and Charlotte Cousins. In all, the Niwot girls golf team will have ten players this season, the largest team Weaver has ever fielded.

Weaver is once again looking ahead to a competitive year in the Northern League, and expects Northridge and the Sheaffer sisters to be their rivals for the title, now that Loveland has moved up to Class 5A. Also gone is Fort Morgan, who left for the Tri-Valley League, leaving the Northern League with just six teams.

Also new this year are “sweeping” rules changes from the USGA that went into effect on January 1, 2019 and may take younger players a bit of getting used to, according to Weaver.

Assisting Weaver with coaching duties is popular Niwot teacher Isaac Peña. The team will hold daily practices at two local courses, Ute Creek and Fox Hill. The Cougars tee off in the Chilly Chili at Eagle Trace on March 16, followed by their first league tournament on March 20 at the Olde Course in Loveland. Later this season, Niwot will play host for this year’s Class 4A Region 3 qualifying tournament, scheduled for May 6 at Longmont’s Fox Hill Country Club.