Pinocchio’s opening in Niwot - and that’s no lie 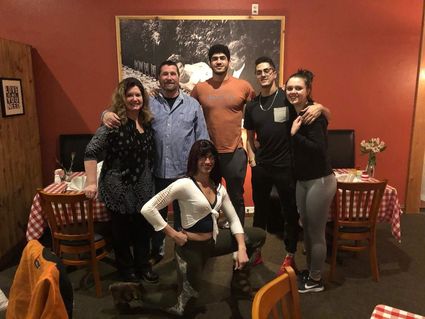 Owner Annie Vick posed in the north Longmont location of Pinocchio’s Incredible Italian Restaurant with (from left to right) husband Rod Vick, sons Justin Lee and Forrest Lee, employee Lexey, and in front, daughter Erica Lee. Vick and crew will be opening a new location on 2nd Avenue in Niwot in the next two months.

Niwot will soon be home to the eighth Pinocchio’s Incredible Italian Restaurant establishment. Founder and owner Annie Vick confirmed the good news – a lease was signed on Feb. 28 for the new eatery to occupy what was formerly Treppeda’s Ristorante at 300 2nd Ave.

The 2300-square-foot space in Niwot will be remodeled to match the décor of existing Pinocchio’s locations. The kitchen will be totally revamped, carpeting installed throughout, and there will be a new bar. Tables will be set with checkered linens and cloth napkins, and the patio will be opened when the weather warms up.

Besides the makeover of the space, the opening date is dependent on red tape, in particular the liquor licensing process. But plans are for the doors to open to welcome guests between mid-April and mid-May.

Pat Murphy, owner of Niwot Real Estate and a long-time customer of Pinocchio’s, reached out to tell Vick about the space being available in December. It wasn’t the first time Vick had considered coming to town, but until this space became empty, it hadn’t worked out.

“I think we can turn that space into a really, really cute, warm and cozy place,” Vick said. ”There will be fresh paint and fresh lighting and a really nice dessert display.”

A former Niwotian, Vick opened her first Pinocchio’s in 2003 on Main Street in Longmont. Then a single mom with three kids, ages 10, 8, and 6, and needing to support the family, she toyed with the idea of going to work in a corporate environment, but decided that opening a restaurant would be the better way to be available for her kids. So she borrowed $15,000 from her mother, overhauled an empty storefront with some serious loving, created a menu any trattoria would be proud of, and started serving food that resonated with the public. With a tremendous amount of courage and dedication, a thriving business was born.

“I worked day and night...sometimes waiting tables and cooking all at the same time,” the back of Vick’s menu reads in the story of her business.

Since that time, the first Pinocchio’s relocated to Ken Pratt Blvd in the Harvest Junction Shopping Center and new locations sprung up in Broomfield and Superior (where they are named Delvickio’s), in north Longmont, Frederick, Superior, and earlier this year another Pinocchio’s opened in Loveland.

All of the dishes are Vick’s recipes. “Growing up, my mom was a really bad cook,” Vick said. “Lasagna was my go-to whenever I cooked and Italian is my favorite so that’s what I lean toward.”

The restaurant is full service and reservations will be accepted. The same menu is offered at every location - featuring appetizers, pasta dishes, garlic bread and salads, pizza, and their very popular made-from-scratch desserts. Traditional Italian dishes are on the menu along with Pinocchio’s own specialty entrées, a variety of light dishes, and gluten-free options.

During the week, the focus will be on lunches and dinners, and on weekends, breakfasts will be served too. Take out has been a big part of business at other locations and Vick said they’re expecting the same in Niwot.

Annie’s husband, Rod Vick, along with all three kids, who are graduates of Niwot High School, work in various capacities for Pinocchio’s. Rod is in charge of the maintenance and build-out operations, Justin Lee (22) is a server while he completes his degree at CU, Forrest Lee (24) manages the north Longmont location, and Erica Lee (26) is in charge of training and supports the staff members who interface with customers in the front of the restaurant.

Vick handles the day-to-day operations for the majority of the restaurants, but is hoping it will become more of a franchise-based business. After graduation, Justin will be helping the business to reach that goal. Vick said customers appreciate having owners onsite and things just run better that way overall. Presently the Broomfield location is the only franchise-owned location.

Knowing that Niwot community events are a big deal in this little town she said, “We will make sure we participate. We like to give back with whatever things are going on in the community. We do fundraisers for kids in school and team meals. We’re all in.”

Pinocchio’s will be hiring around 12 employees to work in the Niwot location. Vick asked that people interested in joining the team email her at EatAtPinocchios@gmail.com. For more information on Pinocchio’s Incredible Italian Restaurant, visit http://www.IncredibleItalian.com.