Niwot junior Jovani Lopez (285) battled Pueblo West senior Jacob Sabus in the consolation round at the Class 4A State Wrestling Championships at the Pepsi Center on Feb. 23.

Neither Niwot wrestler made it very far into his bracket at this year’s Class 4A Colorado Wrestling Championships, but first-time state qualifiers Daniel Torres and Jovani Lopez didn’t walk away from the Pepsi Center empty handed, according to head coach Bobby Matthews.

“They both fought,” he said after Torres and Lopez were eliminated on day two of the tournament, held Feb. 21-23. “They never gave up in any match, and that’s huge….These guys now know what it takes to win here. As coaches, we’ve said it, we’ve told them, but now as leaders, not only do they know for themselves, but now they know for everyone else.”

Matthews said a combination of nerves and inexperience hampered the juniors, who seemed to be overwhelmed by the scope of the event. About 900 wrestlers from four classes participated in at least two matches, attracting tens of thousands of spectators to the 18,000-seat arena.

“Of all the state championships, this is the one that’s different,” Matthews said. “Even though the sport is the same, and we’ve been to big tournaments, it’s different. You don’t wrestle an hour after weigh-ins, it’s hours. Its three days long, it’s a different atmosphere.”

Then there was the talent on the other side of the mat, which proved formidable. Lopez lasted just over a minute in the opening round of the 4A heavyweight division, then fell in a 6-3 decision in the consolation round the next day, even though he was able to get his heavier senior opponent at a disadvantage for a time in the third period.

“I wasn’t satisfied about the ending,” the junior said of his elimination match against Pueblo West’s Jacob Sabus, who finished third overall in the class. During the off-season, Lopez said he plans to spend time in the weight room to gain strength, which he feels is the key to coming back and taking on the best wrestlers in his division.

Meanwhile, in the 195-pound class, Torres was pinned in his first match by Cheyenne Mountain freshman Nico Gagliardi, who also ended the tournament on the podium, as the runner-up. In the first consolation round, Torres earned Niwot’s sole team point of the weekend, with an 8-7 decision over Jay McCoy of Standley Lake. Later, in round two, he was pinned by Windsor’s Tyler Grasmick, after a bid to force a takedown failed. Matthews said that’s where a more experienced wrestler might have been able to pull off the win.

“You can’t really fault him for going out there and trying to score,” he said. “It shows me that he wanted to win. But, when he grabbed the kid’s leg, it actually put him in a worse position. As tantalizing as that leg out there is, you have to avoid it. It’s kind of the forbidden fruit. Experience will get you there.”

Afterwards, Torres agreed with his coach’s assessment of the championship tournament’s atmosphere.

“There’s just an intense amount of pressure here,” he said. “You’re going against the best in the state and sometimes you don’t know how to handle all that. And there’s stuff you’ve never seen; some of the ways people wrestle I’m not used to, so it’s a different experience.

Torres said he learned a lot about his sport during the weekend, but was surprised by how much he already knew.

“A lot of the way that people wrestle here is just the fundamentals, nothing fancy. What surprised me was that a lot of simple techniques that you learn in the beginning really help you out here.”

Like Lopez, Torres has committed to putting more time in at the weight room during the off-season, a plan his coach said was crucial in his quest for the Class 4A podium in February 2020. 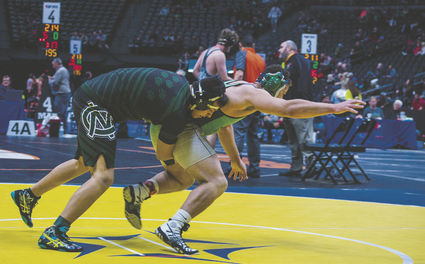 “Right now he is relying on his technique, and he doesn’t have the strength to get out of a few situations. For example, in the last match, he couldn’t get off bottom, he couldn’t get up to his base, and that’s a strength thing.”

With two state qualifiers, Matthews considers the 2018-19 season a success. However, he also acknowledged the team suffered from a “lack of consistency,” which he hopes to correct with the help of those state-experienced veterans. He also hopes they will help attract more athletes and even guys “who want to prove they’re tough.”