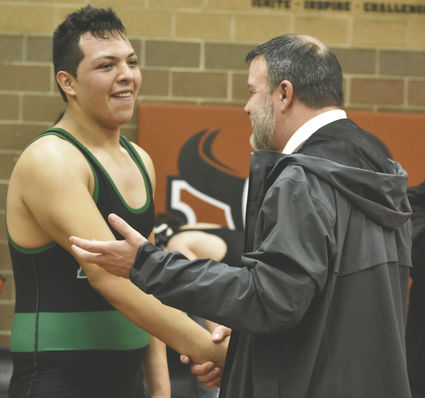 Niwot’s Daniel Torres (195) is congratulated by assistant coach Todd Johnson after beating Erie’s Alonzo Warner in the final wrestleback match of the Class 4A Region 4 tournament to clinch final berth to state.

Niwot will once again be represented at the Class 4A state wrestling championships, thanks to surprising performances by juniors Daniel Torres and Jovani Lopez at the Region 4 qualifying tournament, held Feb. 15-16 at Mead High School.

“In this sport, it’s never over until it’s over,” Niwot head coach Bobby Matthews said after Torres won the tournament’s final match with just seconds left to claim a state qualifying berth in the 195 pound bracket. “These guys came from never really being in the sport and they’re heading to the state tournament. They're one of the top-16. Daniel and Jovani were seeded seventh so they deserve all the credit in the world for the hard work that they’ve put in.”

Torres won a total of five matches over the weekend, the final one a wrestleback against Erie senior Alonzo Warner, which took place as other competitors were clearing out for the day. Torres led by one point as the match wound down, but was finally able to get Warner on his back for the pin.

“He got tired right away and I still had a lot in the tank,” a clearly elated Torres said after the dramatic win to secure fourth place and the state bid. “My coaches said to go all out because I really had nothing to lose. That made me want to keep going and just find a way to take him down and win.”

Torres was equally elated about his improvement over the season, which got off to a rocky start for the junior, but started turning around after he earned a podium spot at the Berthoud Invitational on Jan. 26. He finished the season with a record of 25-22, more than doubling his win total as a sophomore (10).

“I feel like I’ve accomplished so much over the season,” he said. “It’s amazing how I started as a freshman not knowing anything and now I’ve gone far and it’s just my junior year.”

Matthews called Torres “smart,” and praised his wrestler’s patience, a trait served him well during the long periods between bouts at Mead.

“In the last couple of weeks, he shown a knack for digging deep in the third period and winning,” Matthews said. “Mistakes used to cost him, and he’d get frustrated and not know what to do. Now he just sticks to his game and comes out with some pretty big wins.”

Lopez finished fourth overall in the 285-pound bracket and will follow in the footsteps of his older brother Jose, another heavyweight state qualifier. After losing in the quarterfinals of the championship round to the eventual title winner, Lopez pinned three straight opponents, ending with senior Ty Starks of Greeley West, who had a 17-8 recording coming into the weekend.

“He was stronger than me,” Lopez said after the grueling match, which had him trailing 6-5 before the takedown in the fourth minute. “But I used the techniques that the coaches taught me.”

Lopez said he didn’t expect to be heading to the state championships this season. He finished with a 24-13 varsity records, but, like Torres, didn’t have a particularly strong start. “Everyone really doubted me except my coaches. I doubted myself, too.”

Matthews said afterwards that Lopez brings a lot more than his size to his matches.

“Jovani is usually outweighed by almost 50 pounds and he uses his athleticism and speed and just wrestles. He’s come a long way and obviously it’s good to get him to state.” 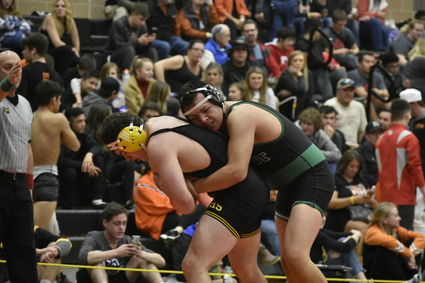 Niwot’s Daniel Torres (195) competed against Erie’s Alonzo Warner in the final wrestleback match of the Class 4A Region 4 tournament to clinch final berth to state.

Elsewhere, there wasn’t much to celebrate for the Cougars wrestlers at Mead. Lopez and Torres were the only competitors to score for Niwot, which finished last in the team standings. Junior Keith Hemenway (152) had to skip the weekend due to illness, while the rest of the crew were eliminated by the second consolation round.

Torres and Lopez will spend the week “eating healthy and going hard at practice” before taking the mat at the Pepsi Center on Feb. 21. Both are seeded 14th in their brackets, and will face the number three seed in the first round.

For his part, Matthews is looking forward to returning to his sports biggest stage, and called the regional results “exciting.”

“I thought a huge step would be for them to place, and they did that. Now it’s up to them."