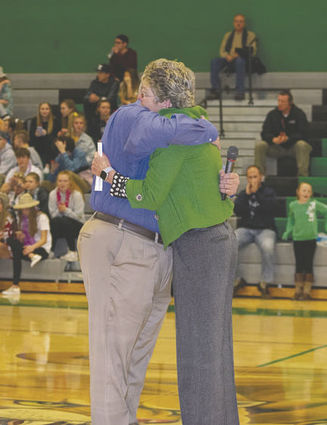 “Leadership is about making others better as a result of their presence and making sure that that impact lasts in their absence,” Assistant CHSAA Commissioner Bert Borgmann said during a formal announcement of Ward’s selection for the honor. “I think Terri is well on her way to proving she is one of the great leaders of young women in Colorado.”

Borgmann said that Ward was selected for both her historic success as a coach, as well as her advocacy for girls and girls athletics. She joins five other honorees in the 2018 class, and is the first Niwot coach or athlete to receive this recognition.

“I want to thank my family, especially my parents,” Ward said after Borgmann’s remarks. “They’ve been at most of our games for the last 27 years. They’ve been so supportive of me and what I’ve chosen to do. But more than anything, I am proud to be representing Niwot High School as I join the CHSAA Hall of Fame. It’s a great day to be a Cougar.”

Ward has been a force in Colorado high school athletics since her days as a student and pioneering basketball player at Niwot in the 1970s. A member of the first four-year graduating class in 1976, she played under Coach Don Hakonson on one of the school’s first teams for girls. Eventually, she returned to the Niwot area as a teacher, and assumed duties as head coach for the high school team in the late 1980s. Five years ago, she was lured out of a brief retirement for a second stint as Cougars head basketball coach, and recently joined the ranks of the Colorado’s winningest coaches when she collected career win number 300 on Jan. 25.

Longtime fans of Niwot girls basketball were on hand on Feb. 7 to honor Terri Ward for her 300th win and upcoming induction into the CHSAA Hall of Fame.

“I couldn’t have asked for a better coach during high school,” recent Niwot graduate Allie Colvin said. She was on hand to support her former coach, and said that Ward was uniquely deserving of the honor. “She’s not afraid to tell you what you need to hear, especially the older girls. She makes little connections with us so she knows how to make us get it.”