Student-Athlete of the Week: Marcus Chong 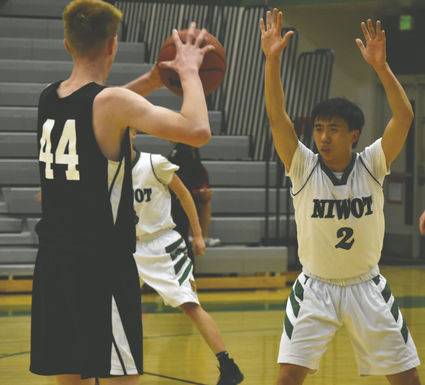 Senior guard Marcus Chong has been one of Niwot’s strongest defenders this season.

By his own admission, senior Marcus Chong is “not the most talkative person” on the Niwot boys basketball team, so when he received the 2019 SVVSD Sportsmanship Award on Jan. 30, he was a “little bit surprised.” For head coach Eric Hejl, however, the self-effacing guard was the natural choice for the honor.

“Marcus is not really vocal, necessarily, but he’s a leader by example,” Hejl said. “He’s so consistent with it. He’s never said a word to an official, he’s there to help even opponents up off the floor, he works hard, and he’s very coachable. He’s never a worry off the court, and all around he’s a real solid kid. Sportsmanship is just a piece of that for him.”

Like his team, Chong has had his share of ups and downs this season, and it was during a recent slump when the senior was the beneficiary of some good sportsmanship himself. Frustrated after a recent loss, Hejl said Chong’s teammates “picked him up in the locker room,” and now he seems to be hitting his stride once again. Chong had a season high seven points in Niwot’s 58-55 win over Thompson Valley, and was a major factor for the Cougars on defense.

“He’s turned it around and come in and done those things we need him to do: take care of the basketball, be more aggressive going to the basket, and play the defense he’s capable of playing on some of those better guards from the other teams. It’s been a nice little turn around for him, and he’s back to where he should be in terms of his contribution.”

Chong took up basketball in seventh grade after a group of friends lured him away from soccer. He is new to the varsity squad this season, but has been with the program throughout high school. He said his favorite memory from his time with the Cougars is the win over Longmont in 2017 that broke a ten-year losing streak against the Trojans. 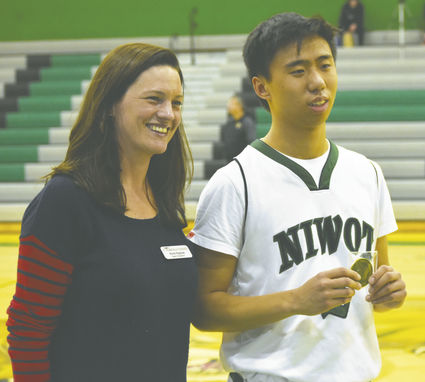 Chong received the 2019 SVVSD Sportsmanship Award from area school board representative Karen Ragland prior to Niwot’s game against Thompson Valley on Jan. 30.

The senior said he’s enjoyed the support of his fellow players in his final season, and also credited the Niwot coaches for their role in his recent resurgence.

“They’ve been emphasizing attacking the basket, which is generally what my game revolves around, that and driving. That really opens up a lot of things for my teammates and helps them get shots.”

In the classroom, Chong is a budding engineer with a full course load of AP classes, including Biology, Literature, Computer Science, and IB economics. He is also in AP Statistics, which he counts among his favorites.

“I have Mr. Fox, who is also our basketball coach, for a stats teacher and I feel like he really cares about me as a person and not just what I do on the court or in the classroom.”

Chong’s post-high school plans have yet to be determined, but he has applied to CU, Colorado School of Mines, and schools in Florida and Washington.