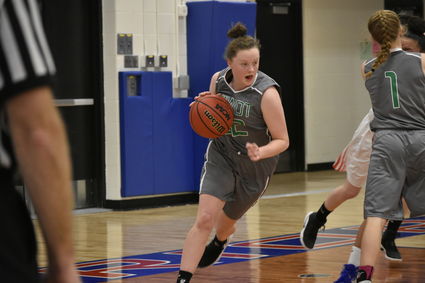 Junior Lily Sieben takes the ball up the court after a rebound against Centaurus on Jan. 22. Sieben had a double-double for the Cougars, with 12 points and 11 rebounds.

The Niwot girls basketball team delivered a milestone win to head coach Terri Ward on Jan. 25, but it was their disciplined performance during the historic game that had her more excited afterwards.

“I thought we played great,” she said after the Cougars cruised to a decisive 53-42 win over Mountain View, the 300th of the longtime coach’s storied career with her alma mater. “That was probably the first four full quarters that we’ve played this season, and that was really important. The good thing is that this is over now and we can focus on what we need to focus on, which is winning some more basketball games.”

Ward certainly knows about winning basketball games. The longtime coach graduated from Niwot in the 1970s, where she played under Coach Don Hakonson, and returned first as an assistant to Hakonson before becoming head coach of girls basketball and volleyball there in the late 1980s. She retired after 20 years, but was coaxed out of retirement in 2013 and is now on her second stint with the team.

Winning more games should prove easy if Niwot can play like it did against the Mountain Lions. Paced by junior guard Lily Sieben, the offense turned in what was easily its best performance so far, with season-high marks in points (53), field-goal percentage (50%), three-pointers (7), and free-throws made (16). In all, eight Cougars scored on the night, with three of them—Sieben (14), freshman Rachel Nobel (11) and junior Nikki Sims (11)—ending in double-digits.

“Everyone played really well,” Ward said of the Cougars’ burst of productivity. “Even though I was screaming at my guards, because they were driving me nuts, look who scored points for us. We did a good job overall.”

Ward was even more impressed by her team’s play on the other end of the court. Niwot held the Mountain Lions to 11-for-46 (24%) from the floor, and just 5-for-26 (19%) from two-point range. Early on, sisters Raleigh and Kelsey Basart were a source of trouble, especially in transition where they created repeated turnovers, which translated into baskets. However, the Cougars were able to adjust and take them out of the game by halftime.

“Our defense won this game,” Ward said. “I always go into the locker room and write down what we want to do, and the top word all the way across was ‘defense’. We knew that that was going to be critical, because 44 and 11 are the only two players they have, and they may have had some points, but we played defense.”

Senior forward Brynn Beaton was also excited by the Cougars’ energetic play against the conference foe. She said the team had avoided talking about Ward’s pending milestone too much, and just tried to focus on “playing up to our level,” which paid off in a big way.

“Lily has been on fire a ton, and we’re just really hard workers. We had a great talk before the second half, and it wasn’t about what we were doing wrong, but about what we’re going to do right to keep the lead and get the win.”

It was the third straight victory for the Cougars, who improved to six-10 on the year, with seven games remaining. On Jan. 22, Niwot beat Centaurs 37-26 after pulling away from the Warriors in the second half. Sieben had a double-double, with 12 points and 11 rebounds, but the Cougars again had contributions from most of their lineup, and shot a season high 73 percent (11-for-15) from the free throw line.

Beaton said the team turned a corner after beating Silver Creek the week before. There, Ward gave a halftime talk that was considerably less friendly.

“Winning in overtime against them really pushed us through,” the captain said. “We’ve been practicing a lot better and focusing a lot more in practice, and now we just have better confidence. I always say that confidence is key.”

Ward said that that confident performance will serve as a good model for the final weeks of the season.

“They wanted this one and they wanted to get it done,” she said. “What I need to make them realize is that this is the kind of energy we need to have from here on out. If we play like this, we can beat everybody we have left, except Greeley Central, but we can give them a game.”

This is the second milestone for the longtime coach already this year. On Jan. 8, the Colorado High School Activities Association (CHSAA) announced that it has selected Ward a part of its 2018 Hall of Fame Class. CHSAA Commissioner Rhonda Blanford-Green will formally announce Ward’s selection at a special ceremony during the Niwot/Silver Creek double-header basketball game on Feb. 7. She and five other honorees will be formally inducted on April 23. 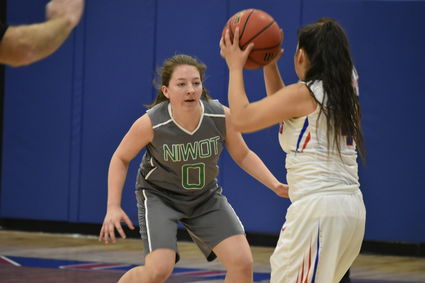