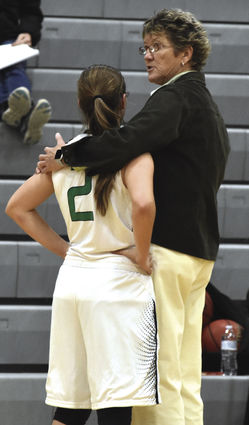 CHSAA 2018 Hall of Fame inductee Terri Ward talks to one of her guards during a tournament game on Jan. 4, 2019.

Calling her “one of the state’s top female sports ambassadors,” the Colorado High School Activities Association (CHSAA) announced on Jan. 8 that Niwot alum and longtime NHS coach Terri Ward is slated for induction as a member of the 30th Anniversary CHSAA Hall of Fame Class.

Ward joins five other honorees in the 2018 class, and is the first Niwot coach or athlete to receive this recognition. She will be enshrined as a significant contributor, owing to both her storied coaching career and her decades-long advocacy on behalf of girls and girls athletics.

“I felt very, very humbled and surprised,” Ward said of the selection. “I’ve never been about accolades. I didn’t get into this career for that, so I have a hard time acknowledging or accepting when I get things like this. For me, it was never going to be about awards, it’s just about being a good teacher.”

Ward said she was also surprised by the sizeable outpouring from both former players and the public following CHSAA’s announcement.

“It’s kind of a good thing for people to know who you are and kind of a bad thing,” she said. “I think the age of social media does that. More people are going to know about things now than 10 or 15 years ago when you just had to read the newspaper.” 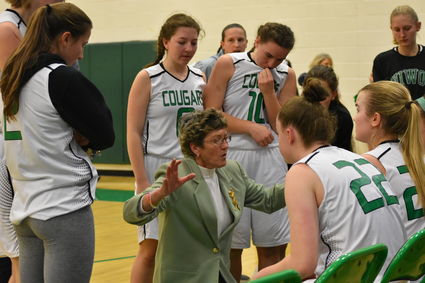 Ward began her career in the 1980s and joined the faculty at her alma mater nearly 30 years ago. During that time, she has a held variety of coaching positions for Niwot’s basketball, volleyball and track teams, and has been active in the leadership ranks of two statewide organizations, Colorado Coaches of Girls Sports and Sportswomen of Colorado. She also served for a time on Women’s Basketball Coach Ceal Berry’s staff at the University of Colorado.

Niwot High School is planning a celebration for the Hall of Fame basketball coach during the final home doubleheader of the season, against Silver Creek on Thursday, Feb. 7. CHSAA Commissioner Ronda Branford-Green will formally announce Ward’s selection during halftime of the boys game.