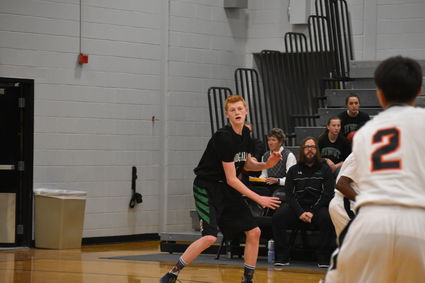 Cooper Sheldon gets into defensive position against Denver West at the Roughrider Shootout on Jan. 3.

The upstart Niwot boys basketball team improved to 6-3 on the season, after going undefeated at the fifth annual Roughrider Shootout, held Jan. 3-5 at Roosevelt High School.

The Cougars averaged 56 points per game in wins over Denver West, Skyview and Conifer during the three-day round robin tournament, thanks to their uptempo play on defense and contributions from players off the bench, according to second-year head coach Eric Hejl.

“When we play defense with energy, we can give teams trouble,” he said. “We talked to these guys about playing fast, and if we want to play fast, then we’ve got to get stops defensively, so our defense can create our offense.”

Niwot pushed the pace on defense from the get-go in Johnstown, and saw it pay off in a big way during the kick-off game against Denver West (1-7) on Thursday. Led by junior guard Cooper Sheldon, the Cougars pressed the Cowboys aggressively in the game’s early minutes, and amassed an 18-0 lead midway through the first period, which they grew to 45-13 going into the break.

The Cougars kept their starters on the bench for most of the third quarter, but still outscored Denver West 15-5, extending their lead to 60-18. That gap prompted a running clock in the fourth quarter, and Niwot went on to win 62-26.

Hejl said the newcomer is quickly making progress and has little trouble keeping up with the more experienced players.

“J.P.’s shown us that he can play into the varsity game and not be overwhelmed by it,” Hejl said. “He needs to get strong, but his hands and his feet and his athleticism are good enough right now that he can do some good things and be productive for us. I don’t want to say it’s been a pleasant surprise, because it’s not really a surprise, but it’s been nice to have the additional depth as far as the big guys go.”

The Cougars saw similar success early on against Skyview the next day, but the more competitive Wolverines were able to break Niwot’s press before things got too far out of hand.

Sheldon reprised his role as disruptor and led Niwot to a 13-5 lead after the first eight minutes, but the Wolverines eventually penetrated Niwot’s press. The Wolverines finally found some purchase on offense in the second quarter, and narrowed the score to 26-19 at the half, after outscoring the Cougars 14-13. By the end of the third period, Skyview pulled to within two, and Niwot started to feel the pressure.

“When they got back in the game, I feel like that’s where our lapses were defensively,” Hejl said. “We took some bad shots offensively, but our defensive rotations and our communication broke down…. We let the officiating get to us a little bit, coaches included, and we had to step back and refocus from that.”

The Wolverines kept the score close in the final period, but defense was once again Niwot’s salvation, when a steal by Luthens in the game’s final 60 seconds sealed a 55-51 Cougar victory. Afterwards, Sheldon echoed his coach’s sentiments about his team’s effort against the athletic Wolverines. “In the first half we came out firing on all cylinders, and I’d say in the second half we let the refs kind of get into our heads maybe a little bit too much maybe. But we came out and fought and got the win.”

The junior had just two points in the game, but added another five rebounds and four steals to his season totals. According to his coach, however, Sheldon’s outsized impact on his team is hard to capture in a stat line. 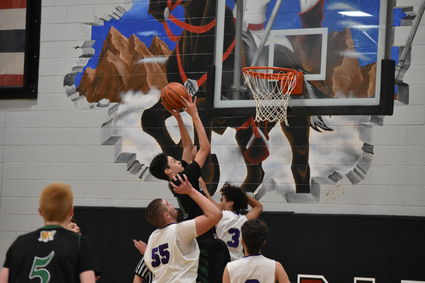 Freshman James Shiers takes a shot against Skyview at the Roughrider Shootout on Jan. 4.

“He has a nose for the ball rebounding, and he’s by far our best communicator in terms of talking on the floor,” Hejl said. “He’s just a heady basketball player. He’s been around the game so much and his basketball IQ is so high that he can make up for any athletic deficiencies or mismatches; if his opponent is a little more athletic than he is, he understands how to still be disruptive in that match-up.”

Luthens and Bounds scored 17 apiece against Skyview, and their fellow senior Alex Erickson had nine.

Niwot posted another close victory on the Shootout’s final day with a 51-48 win over Conifer. Bounds (18) and Luthens (15) were again the leading scorers, followed by junior Austin Rathburn who had nine points, his best game since scoring 10 against Frederick on Nov. 28.

At 6-3, Niwot is currently tied with Silver Creek for third place in the Northern League as conference play gets underway this week. The Cougars host Northridge at home on Jan. 8, then head to Thompson Valley on Jan. 9, returning home on Jan. 11, to face cross-town rival Longmont.