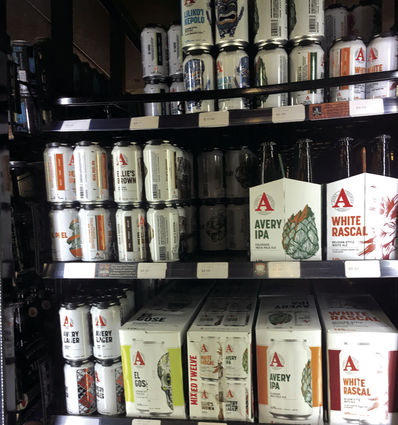 The most substantial update in more than a decade took effect in Colorado’s oft-lamented liquor laws on Jan. 1, 2019, when the sale of full-strength beer and wine was finally allowed in grocery and convenience stores statewide.

Though welcome by most, especially chain retailers and mass-market brewers, the new law is largely regarded as a blow to independent liquor stores, who stand to lose a big chunk of their daily sales.

Bridging the uneasy gap between the two are independent craft breweries, according to Ted Risk, Director of Sales at Wibby Brewing.

“We’re embracing it, because we’re a small business that is growing and needs to adapt to a changing business climate. But we are certainly not doing so without regard to the thoughts of those who helped us get where we are right now.”

Risk and partner Ryan Wibby opened Wibby Brewing in the Butterball truck maintenance facility at 209 Emery Street in Longmont in 2015, and it quickly became one of the area’s largest independent taprooms. Specializing in the lagers, Wibby has seen steady year-to-year growth in both production and foot traffic, thanks to its emphasis on community focused events, such as the recent Holiday Market.

The three-year old brewery has also seen growth in its canning and distribution operations. As of late 2018, Wibby ships its products to dozens of independent retail locations throughout the state, a strategy that Risk is quick to acknowledge helps sustain his company’s growth.

“Market-wise, we’ve just wanted to take every step we could to make sure that the partners at independent stores know how much we appreciate them,” he said. “Our presence is always consistent in those stores, but more so in the last three months just so people understand that while we are trying to stay ahead of the game and embrace the change, we do have a focus on people who have been by our side from the beginning.”

Wibby is one of approximately 50 independent craft breweries that went through Colorado’s complicated licensing process to gain the right to be sold in grocery stores, along with Niwot’s Bootstrap Brewing Company and Gunbarrel’s Avery Brewing. Risk expects to see Wibby products on the shelves of approximately 30 chain stores on the Front Range after New Year’s Day, including Safeway, King Soopers, Lucky’s Market, and Whole Foods, but he isn’t counting on getting statewide distribution just yet.

“Both King Soopers and Safeway did create their sets more regionally or even hyper-regionally than a lot of people thought they would,” he said. “Which makes sense, because that’s the trend in craft beer statewide. You see breweries that are down in the Lone Tree area really do well down there, and breweries in Boulder County really have a following up here.”

Risk said that ultimately, there isn’t much agreement about how the new law will impact the craft beer industry in particular, but for now he’s choosing to be optimistic.

“I hope that people are just buying more beer because of the convenience of when they’re in the grocery store, but they’re still going to the liquor stores to get their wine or craft selections that might not be available in the grocery stores,” he said. “But that’s why I say it’s an unknown. We’re entering into it with the hopes that everybody can benefit from it, but I really don’t know how it’s going to shake out in the market.”