Student-Athlete of the Week: Savannah Parrot 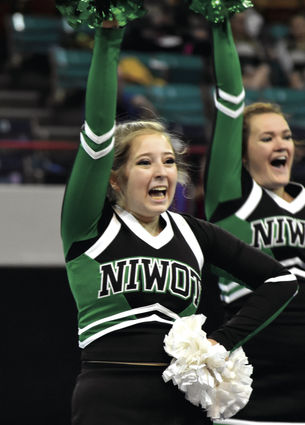 Niwot senior Savannah Parrot performs with the cheer team at the 2018 Class 4A spirit championships.

When she was first featured in this space back in July of 2017, it was hard to imagine how Niwot student Savannah Parrot could possibly fit more on to her already overflowing plate. She was just coming off a successful week at the prestigious Hugh O’Brian Youth Leadership Seminar and was looking ahead to her junior year at Niwot, where she would be starting the IB diploma program and assuming leadership roles for several clubs and teams, such as student council, cheer, Interact Club, and the National Honor Society.

Yet, as a senior, Parrot is somehow even busier.

Prior to the school year, Parrot was named Cougars’ Head Cheerleader, with responsibilities beyond that of a captain. She recently led the team to its third straight appearance in the Class 4A spirit championships, where they took 16th overall.

She remains active in many Niwot clubs, as well as the St. Vrain Valley School District Student Advisory Committee, and the also maintains a 4.31 GPA.

Outside of school, she has taken on leadership and board positions in several community and civic organizations, including the Community Foundation of Boulder County and Jared Polis’ Youth Advisory Council. She is also active in Cotillion and the Denver Ballet Guild.

Her biggest challenges have come as Niwot student body president, where the naturally shy Parrot has had to burnish her sales skills. Earlier this year, Parrot decided to change the school’s traditional pre-game Homecoming celebration from the parade to a carnival, a move that wasn’t necessarily popular all around.

“There were a lot of people who were very against getting rid of the parade,” she said, “but once people actually understood the reasoning behind it, it was easy to get them on board.”

That seemingly hard decision paid off, as attendance at Niwot’s 2018 homecoming game was its highest in years.

President Parrot has also added a Winter Dance to the school’s calendar, this one aimed at underclassmen who usually don’t get a chance to participate in prom. She has also spearheaded an initiative to acknowledge staff and student birthdays each month.

Parrot is also being recognized for her accomplishments. She was named a National Hispanic Scholar by the College Board, and she received the Student of the Month Award from the Niwot Rotary back in September. She is also a semifinalist for the 2019 Coca-Cola Scholars Program, which each year awards 150 students nationwide a $20,000 scholarship.

As for where she might spend those potential winnings, Parrot has her fingers crossed for an early decision to an Ivy League school. Plan B is Northwestern or Vanderbilt. Wherever she ends up, Parrot plans to study economics and pre-law, and then go on to law school and perhaps someday a career in politics. She hopes to continue cheering in college, and plans to get involved in student government.

Parrot admitted that she doesn’t get much downtime, but when she does, she enjoys making friendship bracelets and scuba diving.

As for how the naturally shy eighth-grader became such an accomplished scholar and leader seemingly overnight, Parrot said the first step is the hardest, but the payoff in friends and lifelong connections is worth it.

“With all of the activities, you get to meet people outside of your class level. I probably would not have met any of the girls on the cheer team, and they’re some of the closest friends that I have. I’m so thankful that I met them.”