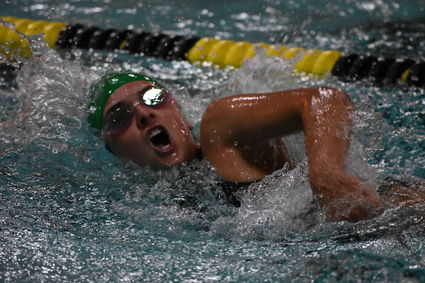 Junior Lauren Cranny swam in the 400 free relay for Niwot.

The Niwot girls swim & dive team hasn’t beaten Thompson Valley in a head-to-head competition in at least a decade, so when the short-handed Cougars came away with a 116-70 win over the Eagles on Dec. 6, head coach Sarah Stamp couldn’t help but be impressed.

“They’re one of the strongest teams in our conference,” she said, “so to do what we did today against them is awesome. It’s still December, so to be this strong this early is promising.”

Niwot swimmers took first in 11 of the meet’s 12 events, with state qualifying times in all but two. Among the top performers on the day were senior Hannah Luo and sophomore Emily Yie, who each had two individual wins and two relay wins on the day.

The win over the Eagles was all the more remarkable considering the Cougars have been dealing with some upheaval outside the pool this offseason. First, the team lost star Payten Irwin to the brand new Class 3A team at Erie High, which is her home school. Because Erie didn’t have a team before now, Irwin swam for Niwot, for her freshman and sophomore seasons. There are also a couple of new Class 4A teams in the area (Longmont, Broomfield), thanks to CHSAA’s biennial reclassification.

Then, in August, Longmont’s Centennial Pool closed indefinitely for repairs, forcing Niwot and the other local high school teams to scramble to find open pool time.

Luckily for Stamp, the Cougars seem to be taking the disruption in stride, if their early season results are to be believed. In addition to the dual win over Thompson Valley, Niwot finished fourth out of 11 at the Valley Viking Invitational on Dec. 1, and then, on Dec. 8, the Cougars were eighth of 16 at the highly competitive the Legacy Lightning Invite, which included all three 2018 state championship teams. They also have at least 10 swimmers with a state-qualifying time so far this year.

Stamp chalks this early success up to her team’s depth, enviable even after the loss of junior Irwin, who helped lead the Cougars to a surprising fifth-place finish at the 2018 Class 4A state championships. Returning state-qualifiers include seniors Luo, Kristi Vu, and Claire Jepson, as well as junior Abbie Shaw and sophomores Yie, Lucca Fulkerson and Natalie Sessleman. Shaw and Yie were also instrumental in Niwot’s impressive finish at state last season, and Stamp expects them to lead Niwot back to the top-five in 2019.

Like last year, the Cougars also have a crop of talented newcomers joining the state-experienced swimmers, including Grace Shaw, Abbie’s sister. At last weekend’s Legacy Invite, the freshman took eighth overall in the 100 breastroke and 11th in the 200 IM. She was also on the Cougars’ third- place 200 freestyle relay team. Another newcomer is sophomore Sophia Gaspar, who qualified for state in the 100 butterfly at the Thompson Valley dual. Senior Rosemary Morrissey is also a rookie this year, but she is making the most of short time with the team. 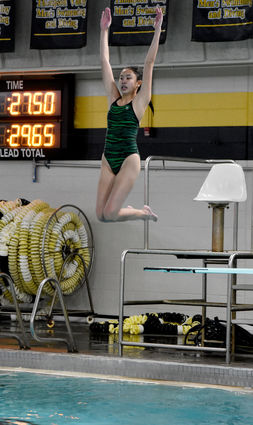 Niwot diver Shayla Tran made her debut against Thompson Valley on Dec. 6.

Niwot will also have a full complement of divers this season, including returning sophomore Halie Ostrom. Though a busy travel schedule kept her from practicing much during the offseason, Ostrom has clearly made strides from her freshman year. She will be joined by Shayla Tran, who made her debut against the Eagles, as well as another freshman.

Though it’s still early, Stamp said she’s pleased with her team’s resilience in the face of chaos so far this season, and is expecting another impressive finish at state. “We’ve only had block practice once, so to not have anyone kill each other off the blocks is fabulous. It’s fun to start piecing things together, and seeing what we have.”

Niwot goes to Greeley West for a dual on Dec. 13 and then heads into the holiday break. The Cougars will be back in the pool on at 9 a.m. on Jan. 5 for the Mountain View Invite at the Mountain View Aquatic Center in Loveland.