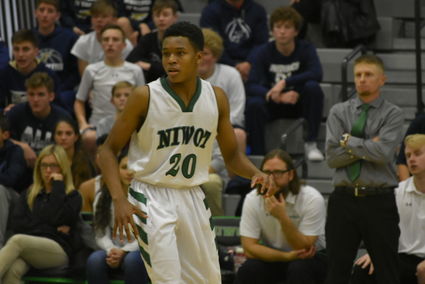 Junior Kyle Reeves waits for an inbounds pass during the Cougars’ win over Frederick on Nov. 28. The new varsity guard impressed his senior teammate Dominick Luthens, “Kyle’s rebounding like a grown man in there, grabbing boards and bodying people. I like that. He’s a strong kid.”

The 2018-19 season of Niwot boys basketball began much the same way the 2017-18 season did—with a hard fought win over cross-town rival Frederick, coached by former NHS coach Enoch Miller. But senior forward Dom Luthens is confident that his team’s close bond means that this season won’t end the same way last season did— without winning another game.

“We’ve grown together on the court more since last season,” Luthens said after his layup at the buzzer secured the 73-71 win for Niwot in their season opener Nov. 28. “We had our struggles last year as teammates, but I think our growth on and off the court will continue and be reflected in our record, in our execution on offense, and our effort on defense.”

Luthens isn’t the only one who was impressed by the Cougars’ chemistry in their first game back on the court since February. Second-year head coach Eric Hejl is eager to put last year’s disastrous 1-22 season in the rearview mirror, and said a win in their highest scoring game since the 2015 is a step in the right direction.

“More than anything it was a huge team win,” Hejl said. “We’ve been really stressing that we’re going to need contributions from everybody….This team is willing to play for each other, and they’re willing to do what we’re asking of them as coaches, and hopefully we can just build off of this one.”

There were certainly hopeful signs that the program is back on track against the Warriors, notably on offense. Though both teams started slowly—probably due to first-game creakiness —Luthens and his senior teammate Tommy Bounds combined to lead the Cougars to a 37-33 first half lead, though they had plenty of help from fellow seniors Alex Erickson and Marcus Chong, among others.

The game tightened in the second half, but not for a lack of offensive production. Niwot scored 20 in the third quarter, but led by just one going into the fourth. Frederick tied it up at 59-59 after Luthens was called for a technical foul, but the big senior made up for it later on when he nabbed a pass from junior Kyle Reeves for the game winning layup in the final seconds.

“To see them execute a play like that at the end of the game, under pressure, and do that when they’re not used to finishing games that way - not having that experience before, but having the composure and the voice to figure it out and get it done was big,” Hejl said.

The Cougars shot 54 percent from the floor on the night (28 of 52) and 11-of-13 from the line. Niwot had three scorers in double-digits, including Luthens with 15, Bounds who led the team with 17, and junior Austin Rathburn (10).

“I think we can be a team that’s not one dimensional,” Hejl said. “I know Tommy’s going to get hot and have his quarters, but we had three or four other guys hit big shots and get big rebounds and make big plays that people didn’t necessarily expect, or that hadn’t had the varsity experience before.”

In all, eight Cougars scored in the game, including Marcus Chong and Kyle Reeves, who each had had six points in their varsity debuts. Both Hejl and Luthens had praise for the athletic Reeves, whose dynamic style adds a spark on both offense and defense.

“He’s quick off the floor, a quick-twitch muscle type of guy who can close gaps,” Hejl said of the junior. “So if we can harness that and get him to do it within the construct of the team, the sky’s the limit.”

Defensively, however, the Cougars had a hard time harnessing the speedy Warriors, who were especially effective from three-point range all night. Both Luthens and Hejl were expecting to see more containment on defense, but both also said they expect to “tighten things up” in future games.

“We gave up way too many shots,” Luthens said. “We have all-conference shooters on our team, so we know how to close out shooters with a hand up. It’s a vital part of the defense when you’re guarding three-point shooters, and we didn’t execute that tonight. If we had, it would have been a much different game.” 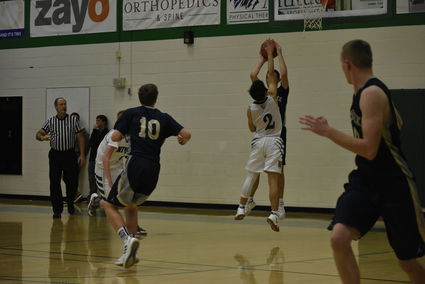 Senior Marcus Chong with a block against Frederick in the season opener on Nov. 28.

Overall, Hejl expects this year’s team will play “downhill both offensively and defensively,” which he hopes will lead to more scoring. However, he thinks the most important difference between this year’s team and last year’s lies more in what’s been happening off the court.

Up next for the Cougars is the Santiago’s Shootout kickoff tournament at Fort Lupton on Dec. 7-8.