Student-Athlete of the Week: Layla Roebke 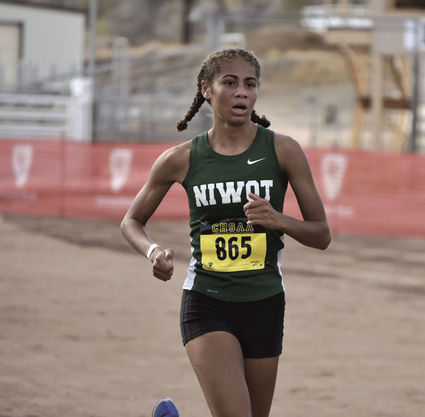 When Layla Roebke joined the Niwot girls cross country team this season, it didn’t just add another talented runner to the roster. She also proved to be a crucial ingredient in head coach Kelly Christensen’s state championship formula. With a personal-best time of 18 minutes 29 seconds, the newcomer claimed an upset win in this year’s Class 4A title race and led the Cougars to their first ever team title.

“Obviously, we couldn’t have done many of the things we did without having her,” Christensen said of the senior, who spent her first three seasons at Coronado High in Colorado Springs. “She’s very coachable and hard-working, and she loves running…. In talking with [former coach] Lisa Rainsberger as she transitioned up here, I knew we were getting a special girl.”

Though she was a three-time Class 5A state qualifier with Coronado, the senior had a breakout season under Christensen’s program. At the Liberty Bell Invitational on Sept. 8, her first 5k race for Niwot, Roebke set a new personal mark of 18:32, besting the old one set back in 2016 by more than a minute (19:34). At this year’s Desert Twilight race in Arizona, she finished in 18:38, which was more than two minutes faster than her 2017 time of 20:45.

Roebke earned her fateful fourth trip to the state championships with a second-place finish at this year’s Class 4A region 3 meet on Oct. 18. There, she gained some notice by fending off a late challenge from Centaurus runner Molly Maskin and helping teammate Taylor James claim the individual title.

Christensen attributed Roebke’s improvement this season to Niwot’s style of training, which emphasizes team-building as much as individual results. This year, Christensen was able to successfully implement a pack running style with his girls squad, a crucial component of their successful state title bid.

“Having the Niwot girls to run with all the time helped a lot,” he said. “She was always stuck in the same place as the top girl at Coronado and had to go out and seek other training options to really be pushed.”

Roebke echoed Christensen’s sentiments about her new training regimen and teammates, calling her new workouts “very different from my Coronado workouts.” However, the most significant change for her this year couldn’t be measured by a timer.

“Mostly, it’s believing in my abilities to go out and run to my fitness level,” she said.

Roebke’s competitive running season didn’t end with the state title win. On Nov. 19, she and the Cougars took third overall at the Nike Cross National Southwest regional in Arizona, earning an at-large bid to the prestigious National race on Dec. 1. This spring, she also plans to join Niwot’s track team as a distance specialist.

When she’s not out pounding the pavement (or track) for Niwot, Roebke can probably be found indulging her passion for art, which she hopes to pursue as a career someday. Roebke especially enjoys painting and sketching, and plans to display her work in the year-end show for Niwot’s IB Visual Arts program.

Roebke hopes to continue her running career in college, but she hasn’t yet decided where that will be.

In the meantime, she plans to enjoy her last year of high school and all of her new friends

“It was difficult to have to leave my teammates at Coronado, but it was really good coming to Niwot,” Roebke said. “It’s such a great team, and not just running-wise. They were all so welcoming.”