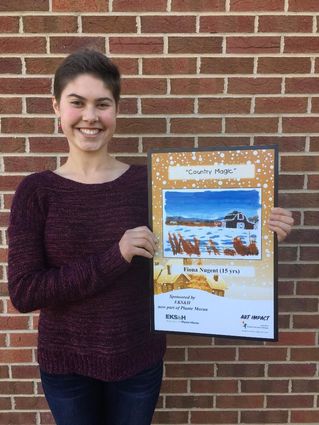 Children’s Hospital of Colorado oncology patient, and one of its art contest winners for her landscape painting, Fiona Nugent is a resident of Niwot and a sophomore at Niwot High School. Nugent's painting was included in the hospital's 2018 holiday cards collection. All proceeds from the sales of the cards go to oncology patients' needs at the hospital.

Fifteen-year-old Fiona Nugent was a patient at Children’s Hospital of Colorado when a volunteer visited her room and told her about an art contest the hospital holds each year. Nugent was instantly interested and knew precisely what she would like to do. She wanted to create a painting of a landscape scene she’d photographed – it was of a snow-covered barn that had caught her attention on Airport Road.

Nugent, a sophomore at Niwot High School, said, “I’ve always enjoyed art as a way to just chill out and relax.”

Nugent’s stay in the hospital, however, was on the other end of the spectrum. What she and her family thought was perhaps appendicitis this past February, ended up in an emergency room trip and then the discovery of an abdominal mass. Doctors at Children’s Hospital removed the tumor, performed a biopsy, and a week later Nugent and her family were informed it was cancerous.

She underwent six months of chemotherapy following the diagnosis, and finished treatment on Aug. 2. The following day, she submitted her 8” x 11” painting in the art contest. She learned she was one of the winners a month later.

Nugent’s submission was one of 40 paintings and drawings the judges received from either current or former patients. Her painting, along with eight other pieces, was selected to be on the hospital’s 2018 holiday card collection. All of the money raised from sales of the cards goes toward oncology patient care at Children’s Hospital.

Since undergoing surgery and chemotherapy, Nugent said she’s doing very well and that her energy level is back again. She’s looking forward to slowly getting back into running, including running on NHS’s cross country team again.

“I’m doing fine. In fact, this past week, we were in Seattle and I got to have my first taste of sushi and oysters, which I had not been allowed to have,” Nugent said. “I love seafood, so that was really fun this week.”

Because chemotherapy significantly lowers the immune system, neither of those foods is recommended for a while.

Nugent’s talents and interests go beyond her painting. She’s been playing the cello for over four years and is a singer in NHS’s Evenstar chorus. To celebrate the end of her treatment, she went to a Red Rocks’ performance by Yo-Yo Ma, the world-renowned cellist.

“It was gorgeous,” Nugent said.” This was his third rendition of the Bach Suites and I’d listened to the previous ones. It was really cool picking out the different stylistic choices that he made.”

Each art contest winner attended the award ceremony in October where each artist received a plaque and a cash prize. In addition to the recognition, Nugent said it’s also a joy to be able to give back to the hospital.

“It’s never fun to be in the hospital, but if there’s any hospital I could have been in, that is the place I would go to,” Nugent said. “The nurses are sweethearts and they know what they’re doing. We had an awesome team of doctors that we really trusted. They’re so good at making the experience as fun as possible, especially for the little kids, which is really sweet to see.”