Student-Athlete of the Week: DaeMonte Terry

Series: Student-Athlete of the Week | Story 3 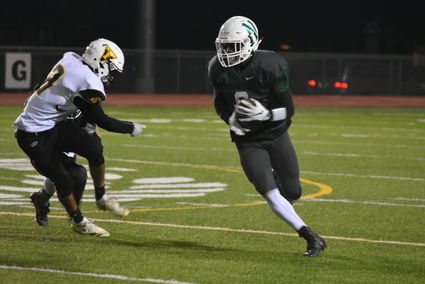 The Niwot Football team didn’t win many games in 2018, but it was, by many measures, the most successful season in years. Thanks to dynamic individual performances and strong team chemistry, the Cougars were competitive in most of their games, and showed clear and consistent improvement on both sides of the ball.

To be sure, a number of factors contributed to the memorable season, but for head coach Jeremy Lanter, the play and positive leadership of senior DaeMonte Terry are two of the most important.

“I tell the kids all the time, a successful or a losing program doesn’t have to be about the wins and losses that you see in a year,” he said. “It’s about the attitudes and perceptions of the people involved. Our kids now believe they can win, and a lot of that reverts back to [DaeMonte] and the attitude he set for us.”

Terry was named the 2018 Niwot Football Player of the Year at the team awards banquet on Nov. 16, and it’s not hard to see why. As a linebacker and kick returner, he was a force for the Cougars on both defense and special teams.

In nine games this season, he had 479 return yards, the fourth highest in Class 4A. His longest of the year came against Littleton in week five when he returned a punt 73 yards to put the Cougars in scoring position at the start of the second half. Niwot went on to win 17-10, and Terry ended the night with a season-best 138 return yards.

On defense, Terry had 31 tackles on the season, as well as two interceptions and a fumble recovery.

“When you mix that with the fire and the energy that he does everything with and the positive attitude that he tried to keep while doing it, he was just a staple for us,” the coach said. “He was a cornerstone. Everything that we were trying to accomplish we built around DaeMonte.”

On the sidelines, Terry was often the Cougars’ chief motivator and helped the team keep a positive outlook, even when things weren’t going so well on the field.

“He and I talked a lot about how to handle that kind of diversity,” Lanter said. “Kids really looked up to him because of his ability to do those things. A year ago we didn't have anybody on the field who would have reacted like that in those situations.”

Terry’s standout senior season for Niwot almost didn’t happen. As a junior, he didn’t see much time due to an injury, and then a financial setback for his family led him to give up the sport altogether by the end of the 2017 season.

“We were planning to move to North Carolina to live with some family,” he said. “So I stopped doing sports and trying in school because I was really sad that we were leaving.”

Coach Lanter was able to help the family to stay, and Terry decided to make the most of his second chance.

“Over the summer, I felt blessed to be able to still be there for the team,” Terry said. “So I decided to put in the work…. I felt the least I could do was give my best effort.”

Terry added 25 pounds of “pure muscle” thanks to that hard work, and the on-field results are evident. However, the example Terry’s hard work sets off the field will have the most lasting impact on the program, according to Lanter.

“It started off as three or four kids in the weight room,” he said. “Then because of DaeMonte and his hard work and the success he was having, and the attitude he carries around to the people, we got those numbers up by the end of the summer to around 30 to 35 kids every day.”

Terry’s hard work and success have carried over to the classroom, where he is earning a 3.0 GPA for the semester, “which I’ve never done,” he said. His favorite classes are English and algebra II. He plans to go out for track this spring, and will be doing some offseason training with Coach Maurice Henriques and his Real Training running club. 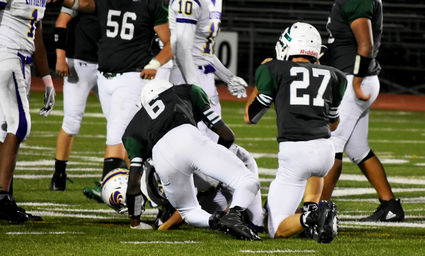 Seniors DaeMonte Terry and Cory Rathburn made it into the Littleton backfield numerous times in Niwot’s win over the Lions on Sept. 14.

After graduation, Terry plans to spend a year at Front Range Community College to get his grades up even further and then transfer to CU-Boulder to pursue a degree in business management.

“I didn’t even think about going to college until Coach Lanter talked me into it,” he said.

Until then, Terry is looking forward to spending some time with his friends during the short offseason and reminiscing about his special season with the Niwot Football program.

“My favorite part was building the team,” he said. “Last year when I was here, it really didn't feel like a team. This year we did a lot of bonding activities and hanging out on and off the field, and I like that the most.”