Old Oak is a solid addition to Niwot 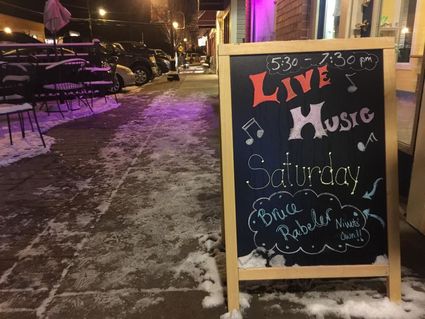 Old Oak Coffeehouse is a hub for the community, including local musicians playing to patrons each Saturday night.

Since Michael Tomich and Patty Machen opened the door of Old Oak Coffeehouse a little over a year ago, it has lived up the symbolism of its namesake – it’s become a thriving and solid part of the community. So, when a smash and grab burglar made the cafe one of the victims of a string of small businesses robbed in the last two weeks, Tomich said the tree was a bit shaken.

“To see someone in my shop, with a mask and gloves destroying and stealing,” Tomich said of the video footage he reviewed, “was such a violation.”

Psychologically it’s been hard to fathom, and financially it’s not easy either. The crime resulted in $1,000 out-of-pocket damages.

Transforming the retail space into what they dreamed their coffee business would be was a labor of love. The woodwork of the countertops and display case, the details of painted trim, wainscoting, and crown molding, and the frames for their signs were each created by the hands of the owners.

Tomich and Machen are carrying through on their original commitment to nourish the community in body and soul through their food and drink and with the creativity of local artists and musicians. Their first year was a warm-up period and now they feel they’re hitting their stride with the business.

“We were so afraid of the whole coffee and espresso thing, but Andy demystified it and gently coaxed us into having the knowledge we needed,” Tomich said. They definitely have it down now and, along with Silver Canyon Coffee, they donated coffee for 250 people at this year’s Niwot Trot.

The kitchen is small, but they’ve discovered it’s mighty. They used to buy their baked goods. Now they make their own homemade goods with a convection oven and a hot plate. Fresh out-of-the-oven scones, banana breads, breakfast sandwiches, and baked oatmeal are on the daily menu. For the lunch crowd there are homemade Paninis.

The coffee bar morphs into an adult beverage bar now that the establishment can sell wine and beer. Happy hour is every Monday through Saturday from 3 - 5 p.m. Tomich said they are the first establishment to get permission to serve alcohol on Boulder County property, which is the sidewalk bump-out that serves as the patio in front of their business.

A substantial base of loyal customers has made Old Oak a regular habit, Tomich said, and that’s his favorite part of the business, especially watching generations of people connecting. In addition to those who come in for a cup ‘o joe every day, there’s a weekly knitting group and a couple of book clubs who meet there.

Every Saturday heaping plates of spaghetti and meatballs, Michael’s grandmother’s recipe, are served. The newest special is a combo of waffles and mimosas every second Sunday of the month.

A crew of six employees at Old Oak is headed up by manager Hannah Carlson, who is credited with “shifting the business model.” Carlson runs the daily operations of the store, handling everything from the creative lettering of the menu chalkboard to being responsible for the artist exhibits and musical booking side of the business.

Each month, the walls of Old Oak become home to a different artist – painters’, photographers’, and potters’ installations are scheduled all the way into April.

Both Tomich and Machen are talented musicians who have formed the House Blend Band soon to make an appearance on their own stage – ahem - corner of the room. Their roots run deep in the local music scene, drawing a variety of performers to the venue who graciously entertain in the intimate space for well, a song and a dance, meaning very little money.

The next act on their calendar is Niwotian Bruce Rabeler, whose first CD release coincides with his performance 5:30 - 7:30 p.m., Saturday, Nov. 24. Titled, “Come Dance with me,” the CD is a 40-years-in-the-making compilation of original songs Rabeler has been working on since he was 17 years old.

He originally set out to just make a demo CD of a few songs, but he realized he enjoyed the process of making a CD so much that he’s already started on a second one.

The self-taught musician is always drawn to the beat first he said, and to that end he’s developed his own finger-picking technique he described as bouncy rather than strumming. It’s him and his guitar and it’s rhythm-based with a little bit of blues, so Rabeler has labeled his style as Troubadour R&B.

In addition to his day job as a sales representative with Little Valley Nursery, being the co-owner of Little Bird store with his wife Liz Gould, and being the treasurer of the Niwot LID, Rabeler is a visual artist specializing in macro-botanical photography. The cover of his CD is a still life photo taken while on a recent trip to Mallorca.

The album was recorded at the Rollinsville studio of Ray Smith and Cari Minor who together are the local band Strangebyrds, which has performed at Rock & Rails. Smith provides some type of instrumentation on every track and both Smith and Minor also sang on a couple of tracks, “adding a depth of sound” Rabeler said.

Bruce Rabeler’s CD and photography are available for purchase at Little Bird, 112 2nd Avenue, Niwot, in addition to BruceRabeler.com and http://www.cdbaby.com.