Student-Athlete of the Week: Katie Hirsh

Series: Student-Athlete of the Week | Story 2 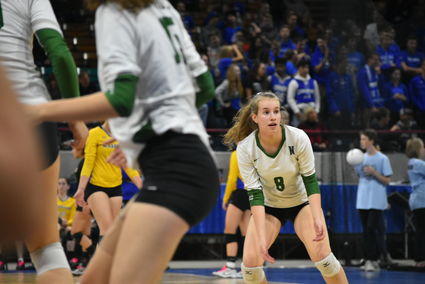 Student-Athlete of the Week: Katie Hirsh

The Niwot volleyball team had many weapons at its disposal this season, and one of the most effective was the irrepressible cheer of senior Katie Hirsh.

“That girl gets us pumped up and fired up,” head coach Daisha Agho said of the setter turned defensive specialist. “She takes us out of huddles every single time because of her spunk and her attitude. When things are looking down, we look to Katie to get a spark.”

Things were certainly looking down for the Cougars at this year’s Class 4A state championships after star middle hitter Audrey Richard injured her leg in a collision with an opposing player. After the match, Hirsh remained optimistic about the team’s ability to pull together and weather the apparent crisis.

“We know that no matter what’s happening, we have each other,” she said. “We just foster a lot of love for each other, and it’s just so much fun to play in that kind of environment. When we play well is when we really count on each other.”

With Richard in a limited role the following day, Hirsh also helped fill in the gap on defense, leading to a dramatic sweep of cross-town rival Longmont to put the Cougars in their first title match since 1990.

Hirsh’s affection for both the sport and her “amazing” teammates is infectious. She has been playing volleyball for eight years, and joined the Niwot program as a freshman. A setter for most of her career, Hirsh changed positions to make room when Madison Schoeder joined the team in 2017.

“I love learning how to play defense and how to serve receive,” she said. “I think it’s just the best feeling in the world when someone drives a hard ball down the line and you dig it. That’s a great part of volleyball.”

According to Agho, she has also quietly assumed a role as team leader, mostly by example.

In the classroom, Hirsh is a top performer in Niwot’s challenging IB program, and said the instructors are her favorite part of the curriculum. She admits that balancing the heavy IB workload and the long competitive season has been difficult at times.

“I think because I love volleyball so much it’s been an advantage to me,” she said. “It gives me a mental break from thinking about school and academic stuff.” 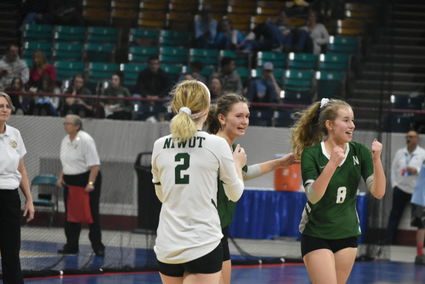 Senior Katie Hirsh (8) was a crucial component on defense for Niwot during this year’s Class 4A volleyball championships.

Hirsh hopes to study biomedical engineering in college, but she’s not sure yet where she’ll land, though several out-of-state institutions are a possibility, including Northwestern, Case Western Reserve, and the University of Utah.

In her limited spare time, Hirsh is an accomplished painter and artist and somehow still finds time to be an ardent “gamer,” who recently built her own PC.

Hirsh also had a message for fans and supporters of the Niwot volleyball program.

“Everyone’s been really supportive, especially my parents,” she said. “We want everyone to know that the community has been really, really important to our success, and we’re very thankful for that.”