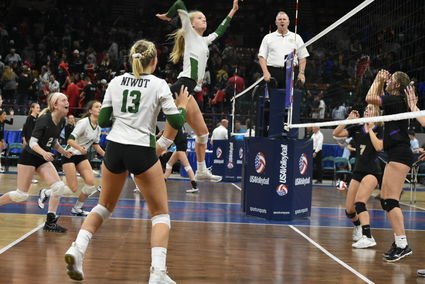 Senior Emma Falk executes a kill during the Cougars’ match against Holy Family in the Class 4A state championships on Nov. 9.

Niwot’s weekend at the Denver Coliseum for 2018 Class 4A state volleyball championships had a theatrical quality to it. There were hard-fought rivalry wins, a devastating injury to a key player, inspirational performances and finally, an unlikely trip to Niwot’s first state championship match in nearly three decades.

What the Cougars didn’t get was a Hollywood ending. Real-life powerhouse Lewis Palmer saw to that with an anti-climactic sweep in the finals (11-25, 15-25, 10-25). But if finishing as the second best team in Class 4A did sting a bit, Niwot still had plenty of reasons to celebrate its historic 2018 season.

“Those are tears of joy,” Cougar Head Coach Daisha Agho said after her seniors exited the court for the final time. “We didn’t end quite as strong as we wanted to, but they’re still very excited about what they’ve accomplished, and deservedly so.”

Niwot’s accomplishments in the postseason alone are worthy of excitement, the loss to Lewis Palmer notwithstanding. The team got its first inkling of drama on the opening day of the state tournament, which moved from pool play to a 12-team bracket format this year, and expanded to three days in the process. After a first round bye, the No. 3 seed Cougars faced No. 6 seed and six-time state champion Cheyenne Mountain after a long day of waiting.

Niwot beat the Indians in four sets (25-21, 25-19, 22-25, 25-16), despite an unfortunate tendency to get big leads and then let Cheyenne Mountain back into contention. In the first set alone, the Cougars were up by nine points three separate times, but they ultimately won by just four. In the second set, Niwot was down 7-13 before coming back to win 25-19, thanks to clutch plays by senior middle hitter Zoe Gonzales down the stretch. Then there was an all too familiar letdown in the third set.

“Winning in three would have been nice,” Agho said. “But there are still some players who haven’t played here before, and those nerves came out a little bit today. If it comes down to fundamental volleyball, we’re fine. If we can play at the pace we want to play, we’re fine. We took that away from ourselves in the third set.”

The drama ramped up on day two, when Niwot faced off against longtime rival and perennial powerhouse Holy Family, the team that ended the Cougars’ state title hopes in 2016 after a dramatic five-set thriller in pool play. Earlier this year, the Cougars beat the Tigers for the first time since 2014, so the rematch had a little more at stake than just a trip to the state semifinals.

The Cougars ultimately claimed a hard-fought, four-set victory, but no one felt much like celebrating after the winning point. During the match play, senior outside hitter Audrey Richard suffered what looked to be a serious injury in a collision with a Tigers’ player, putting her status for Saturday’s final four game in jeopardy. Richard was unquestionably a key component of the win, with a team-high 19 kills, including three down the stretch of set four to keep the Cougars close.

“The team was definitely rattled,” Agho admitted. “Every team faces adversity at some point in the season, and unfortunately, ours came at that time.”

In another plot twist, Niwot’s semifinal opponent ended up being cross-town rival Longmont, which beat No. 2 seed Discovery Canyon earlier in the day to advance. Longmont was one of just three teams to beat the Cougars during the regular season and claimed a co-share of this year’s Northern league title. The Cougars evened the season series on Oct. 18 with an impressive four-set win over the Trojans, making for another anxious rematch at the Coliseum.

The drama reached a fever pitch for Niwot fans when the team took the court for the semifinals with a heavily taped Richard dressed and ready to play, and again, when she came out to serve after Niwot’s first point against the Trojans. When she rotated out, the Cougars were up 4-0, and it was clear that even their injured captain’s limited presence in the lineup would be a big boost for the squad.

“I was just playing for our team,” Richard said of her decision to suit up for the final day. She notched two aces for Niwot in her handful of court appearances. “When all 13 of us are out there as a team, every single one makes a contribution, and if I hadn’t been out there, it would have been a different dynamic. It would have been that way if any of us were injured. We need all of our girls to accomplish what we’ve accomplished.”

Richard’s appearance had the desired effect, as the Cougars swept the Trojans 25-23, 25-22, 25-18, to earn their first state finals berth since 1990. Freshman Zoe Gibbs proved an able replacement outside, and her senior teammates did their part to fill the void, especially Emma Falk who seemed to score every time she touched the ball. She ended the game with a season-high 27 kills. Gonzales added 12 kills and two aces, while setter Madison Schoeder had four kills on seven attempts, as well as three blocks and 40 assists.

“We had a conversation about how each of them has gotten here and how there’s no reason they can’t step up,” Agho said of her advice to the seniors ahead of the shorthanded semifinal. “I told them it’s their job to make sure the team is mentally ready. They did very, very well. It’s the most I’ve seen them focused, especially in that third set that we don’t play well in.”

With momentum seemingly on their side, there was a hopeful buzz around the Cougar bench before the start of the finals, along with a good luck charm from the 1990 team, courtesy of longtime Niwot basketball coach Terri Ward, a member of the volleyball coaching staff back then. Earlier this season, Ward took over coaching duties for the JV volleyball team following the departure of Coleen Ford.

Unfortunately, the Cougars needed more than luck and momentum against the two-time defending champions. Without Richard, Lewis Palmer simply overpowered the shorthanded Cougars, keeping them “on their heels” and out of system for the entire match. 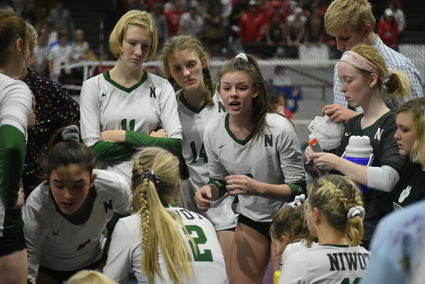 “They’re a fantastic team,” Agho said of the Rangers, who have appeared in seven straight Class 4A finals and won five. “Their serving is on point all the time and we knew that. We tried a couple of different things, but nothing was really working. We started to find a spark in the end a little bit, but it’s too late at that point when they’ve gotten their confidence and have started to roll.”

Even though they fell short, Richard said the weekend would always be special to her and the seniors who have had one goal since freshman year.

“I’ve been dreaming about making it to the finals for so long, ever since I started with Niwot volleyball,” she said. “We’re really a family out there. They’ve taught me so much about love and care and being with a team, living with the team, and playing for the team. I’m really going to miss that.”