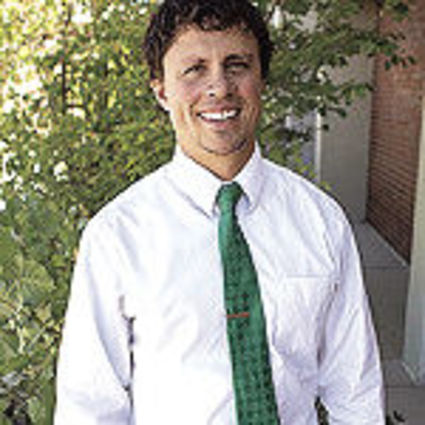 Niwot AP/AD Chase McBride is moving on up to a deluxe administration building on South Pratt Parkway in Longmont to work at the district level.

Fresh off the heels of his school’s second team state championship of the 2018 fall sports season, Niwot assistant principal and athletic director Chase McBride announced that he will be taking his talents to the next level. Effective after the 2018-19 school year, McBride will replace the retiring Rob Berry as Executive Director of Athletics, Fine Arts, PE and Health for the St. Vrain Valley Schools.

“It’s such a successful district and there are such good ADs within the district, that I couldn’t wait for a chance to work with them,” McBride said of the move, which he informed colleagues about on Nov. 7. “And not just in athletics. The fine arts across the district are flourishing.”

In his new position, McBride will be overseeing the activities of more than 30,000 students across 50-plus schools in the St. Vrain Valley, as well as the health and PE departments. McBride joined the Niwot administration in 2014, after a two-year stint as AP/AD at Berthoud High School. Before that, he taught social studies at Mountain Range and Fort Lupton High Schools. During his five years at Niwot, McBride has also been actively involved in the leadership of the Colorado High School Activities Association (CHSAA), and was appointed to its Board of Directors earlier this year.

According to NHS Principal Eric Rauschkolb, it’s hard to overstate McBride’s positive contributions to Niwot’s school culture during his five-year tenure, and not just in the athletic department.

“He has increased the percentage of students involved in extracurricular activities, so he has increased student opportunities,” Rauschkolb said. “Research has shown that students who are involved outside of the regular school day—whether that is music or drama or speech and debate or athletics—that they get higher grades, their attendance is better, and their incidences of disciplinary issues is lower.”

Of course, the athletic success is certainly an important part of McBride’s legacy at the school, especially recently. In just the last six months, the school’s teams and athletes have won three state titles, three runner-up titles, 17 individual titles, and numerous conference and regional titles. Of the eight fall sports teams at Niwot, seven qualified for the post-season, and four were either state champions or runners-up.

Echoing Rauschkolb, McBride said in his new position he will continue his efforts emphasize the positive correlation between academics and extracurricular activities, with a goal of increasing participation rates across the district.

“I don’t care if you’re in sport or in a musical or if you’re in speech and debate,” he said. “The success rate academically for people who are involved in extracurriculars are off the charts.”

McBride will spend time next spring learning the ropes with Berry before officially taking over on July 1, 2019. Berry, who spent time as an AP/AD at Niwot before moving up to the district position, is leaving the position after 15 years, and building on his success is another of McBride’s goals.

The search for McBride’s replacement will be underway soon, according to Rauschkolb. He hopes to officially announce the opening later this month and start interviewing candidates after the first of the year, with the help of a selection committee comprised of “parents, staff, and coaching representation.”

“We expect to get a deep candidate pool based on what an attractive school Niwot is to work at,” the principal said. “What makes this job so attractive is, number one, the solid reputation academically that Niwot has. Number two, we just get better and better at athletics, and that’s very appealing to candidates. But, also, people know that if you come to Niwot High School, you will be well-positioned to succeed at the next level, if that’s your goal.”

McBride expressed his gratitude to the current administration at Niwot and Rauschkolb in particular for giving him “freedom to work so much at the state level.” He also said he will miss the relationships he’s formed during his time as a Cougar.

“The way that the coaching staff here interacts with kids and gets the most out of their student-athletes and the way kids flock to the music and band directors,” he said. “They’re the best in the business, and it’s going to be tough to not see them every day.”